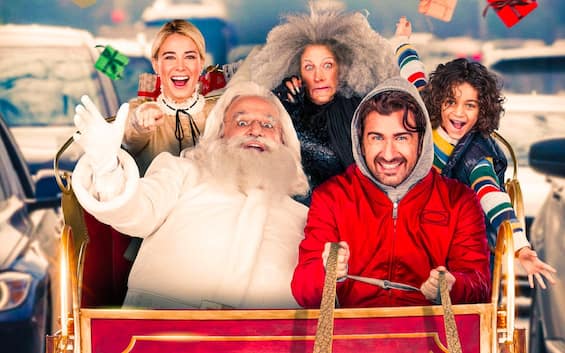 He arrives in first tv on Sky WHO HAS FRAMED SANTA CLAUS?, hilarious modern Christmas tale by and with Alessandro Siani, Monday 5 December at 21.15 on Sky Cinema Uno and Sky Cinema 4K (and at 21.45 also on Sky Cinema Christmas), streaming on NOW and available on demand, also in 4K quality. Next to Alessandro Siani also a great cast including Christian De Sica, Diletta Leotta And Angela Finocchiaro. The film is a Bartlebyfilm and Indiana Production production with Vision Distribution, in collaboration with BUONALUNA

Who Framed Santa Clausthe plot of the movie

Wonderfast, the world’s most powerful online delivery company, dominates the market all year except Christmas. To make Santa Claus go bankrupt, they hire the leader of his elves, convincing him to infiltrate his factory with a new manager: Genny Catalano, known as the “king of parcels”. In reality, the parcels in question are not Christmas gifts but rather the infamous “parcels”. Genny, in fact, is a vulgar swindler who lives by his wits, assisted by Checco, an 8-year-old street urchin. The couple’s arrival at the North Pole will give rise to a series of troubles but in the end, thanks to the improbable mutual contamination that arises between Genny and Santa Claus and the unexpected help of the Befana, the Christmas magic will succeed in triumphing.

On the go Sky Cinema Christmas

The spirit of the holidays is breathed in classic Christmas stories as: the film based on the novel by Frances H. Burnett THE LITTLE LORD with Rick Schroder and Alec Guinness; the cult of fantastic cinema GREMLINSdirected by Joe Dante and produced by Steven Spielberg; the comedy SOS GHOSTS in which Bill Murray is a cynical television producer who is visited by three ghosts, just like in “A Christmas Carol”; the inevitable WHITE CHRISTMAS with Bing Crosby; and the timeless work of Frank Capra THE LIFE IS BEAUTIFUL with James Stewart.

The Christmas atmosphere is not lacking in films now indispensable during the holidaysstarting with the romantic SERENDIPITY – WHEN LOVE IS MAGIC with Kate Beckinsale and John Cusack. It’s still: DICKENS – THE MAN WHO INVENTED CHRISTMAS opposite Dan Stevens as the English writer who brought the literary classic “A Christmas Carol” to life; the heartwarming true story of a dog and his owner, played by Richard Gere, HACHIKO – YOUR BEST FRIEND; the Christmas comedy Sky Original A CHRISTMAS NUMBER ONE with Freida Pinto and Iwan Rheon; And SUDDEN CHRISTMAS with Diane Keaton and John Goodman.

The joy of the holidays finds its culmination in the Italian comedies like blockbuster comedies THE BAND OF SANTA CLAUSES with all the sympathy of Aldo, Giovanni and Giacomo e THE FIRST CHRISTMAS with Ficarra and Picone; the Christmas films produced by Sky A CHRISTMAS FOR TWO with Enrico Brignano and Alessandro Gassmann e A CHRISTMAS WITH FLAKES with Alessandro Gassmann and Silvio Orlando; hit fantasy comedy THE BEFANA COMES AT NIGHT with Paola Cortellesi and Stefano Fresi and the prequel THE BEFANA COMES AT NIGHT II – THE ORIGINS with Monica Bellucci, Fabio De Luigi and Zoe Massenti.

As regards the comedies “made in the USA” are to report: the unleashed THE PARTY BEFORE THE PARTY with Jason Bateman, Jennifer Aniston and TJ Miller; the wild Christmas sequel BAD MOMS 2: MUCH BAD MOMS with Mila Kunis and Susan Sarandon; the glittering comedy with Ben Affleck and James Gandolfini CHRISTMAS FOR RENT And ESCAPE FROM CHRISTMAS with Tim Allen, Jamie Lee Curtis and Dan Aykroyd.

Finally, there are animations of the caliber of POLAR EXPRESS by Robert Zemeckis; and the formidable adventure from DreamWorks RISE OF THE GUARDIANS.