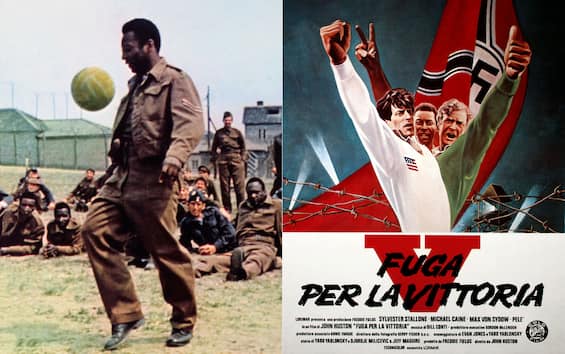 Following his passing, Sky pays tribute to Pele the Brazilian champion who just passed away. ESCAPE TO VICTORY is scheduled tonight 30 December at 10.50 pm on Sky Cinema Due (repeat tomorrow 31/12 at 12.35 pm). Starring Sylvester Stallone, Michael Caine and Pele himself, the film tells of a football match between the German national team and a team of allied prisoners, organized by an officer of a Nazi prison camp.

The homage also continues on Sky Documentaries with the documentary program “PELE’S LAST SHOW“, on air this afternoon at 4.45pm: it was August 28, 1977 when the king of football left his throne. Pelé officially stopped enchanting the world: let’s embark on a journey into that last game, in that long farewell told by those who were there.

Finally Sky Sports Football offers 3 episodes of the miniseries #SkyBuffa Tell. Episode 1 – DICO, THE YOUNG PELÈ (3.45 pm): from the land of Bauru, on the road to Santos the myth takes shape. A shoe shine footballer who conquers the world. The ruler that Brazil has never stopped looking for since 1950. Episode 2 – THE “SANTASTICO” (4.45 pm): 4 world titles between the national team and clubs in a few years: the whole world wants to watch live the Never Ending Tour of Pele and his “Sant-asticos”, the new H. Globetrotters of football. Episode 3 – THE KING WHO LEFT US THE FUTURE (5.45 pm): the World Cup in Sweden at the age of 17 crowns Pele “King” of football. Only 30% of his plays will be visible, but it will be enough to understand how much in advance the future gave us. While at 18.45 the documentary film FIFA: When the World Watched Brazil 1970: unprecedented, elegant and imaginative reinterpretation of the Brazilian team that enchanted the planet at the 1970 FIFA World Cup in Mexico. With the voices of Pelé, Gerson, Jairzinho, Tostao, Rivellino.

All content is also available on demand on Sky and streaming on NOW.