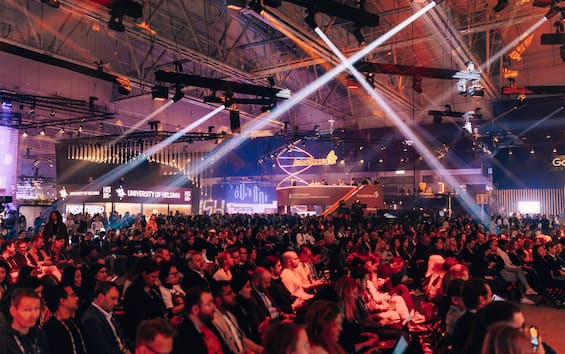 An edition that will go down in history this year’s edition of Slush, the event on technology and innovation for Finnish university students, which takes place every year close to the arrival of the Christmas holidays in Helsinki, which brings together the main Venture Capital , venture capital funds, active in technology.

The €1 million Slush100 prize for the best startup was won by immigram, which helps tech talent, including Russians, get work visas and move to the UK. The startup was founded in London in 2019 by two founder with Russian passport, although one of them has been living in London for 7 years, while the other is based outside London, but lives in Georgia. Immigram won over a Ukrainian startup Zeely, who deals with online marketing. Already from the announcement of the victory, despite the founders having spoken out against the Russian invasion and having promised to allocate 100 thousand euros to the Ukrainian NGOs, online controversy over the decision has begun to flare up. The prize was later revoked by the organizers of Slush, admitting the mistake and announcing the decision in a tweet.

The participation of the Finnish premier

The Finnish premier also took part in this edition Sanna Marineon his 37th birthday. On stage, the young prime minister invited Europe to invest more in technology, signaling that she, according to her, relies too much on countries such as China and Taiwan. We are so economically vulnerable, we don’t risk a crisis like the energy one with the technology sector, due to dependence on Russia, Marin underlined.

Important Italian participation as every year in this event, where our country was present with a space for startups fromICE extension and with a couple of networking appointments, organized by YesMilan. Among the small companies that have impressed us is My-Moneypayment system biometric which will be launched on the market shortly and which allows you to pay with your finger on the new generation POS, without needing a smartphone or smartwatch. You download the My-Money app, where you register your identity, connect cards or other payment methods to the app, and then authenticate your biometric fingerprint using your smartphone camera or in an authorized center . “It’s one of the safest methods,” he told us Mara VendraminCEO and Founder of My-Money – because technology makes it possible to detect whether the person making the payment is actually the cardholder, and it is also inclusive, because anyone who does not own a latest generation smartphone will be able to make purchases” .

On the theme of talent research, which was one of the most popular themes of Slush, the Italian time flow unveiled its platform for finding software development professionals or technology partners, and where technology companies can find new customers there. “In Europe we have approximately 730,000 development companies, an IT sector that is growing by 17% annually. It is a dynamic market because any company needs to digitize its services. For this we have created a platform that simplifies the technology supplier selection process – he explains Lorenzo Danish, CEO and co-founder of TimeFlow -. We thus give companies the opportunity to go beyond their own network of contacts to search for the partner who will be able to develop the software, through our platform that brings together the demand and supply of skills in the digital sector. Any company can publish its need and those of technology can register and increase the business”. Timeflow, which was born and consolidated in Italy, is now expanding its presence in Europe.

Not only startups active in the software sector, but also hardware products launched at Slush. A theme that was debated was in fact the environmental impact that technology has on the environment. Among the Finnish projects that impressed us are the wireless earphones with noise reduction Joy TinyS, which will be sold soon, also in Italy. These earphones are smaller and lighter than other similar devices, while promising to maintain the same sound quality. The decision to make them so small is motivated not only by being able to wear them even when putting on a motorcycle helmet or to sleep, above all to have a lower impact on the planet. Furthermore, by purchasing a Joy TinyS model you have a 3-year guarantee and in the event of loss of one of the earphones or the case, these will be replaced, reports the Finnish founder and CEO Heikki Leskela.

Unlike other major events, Slush is a non-profit tech gathering organized entirely by students, many of whom have gone on to found Finland’s best-known tech companies, from former CEO Miki Kuusi who made the event international and then founded Woltthe largest food-delivery company in Scandinavia, to the young ex-president of the event Emma Lehikoinennow COO of Swappies. In fact, Slush started in 2008 as a training day for a few hundred university students, which was supposed to be used to learn how to do business, in a period of economic crisis, but has instead arrived today to bring together over 12,000 participants in one place on the borders of Europe , 4,600 startups and 2,200 investors, this year alone, which overall brought in investment capital exceeding one trillion euros. According to many of the startups we consulted, Slush is the most interesting event in Europe to meet Venture Capital, lenders who invest in high-risk projects, for their technology startups. And Slush itself functions as an incubator, as well as a mentor, for new projects by young startuppers, through its program node.