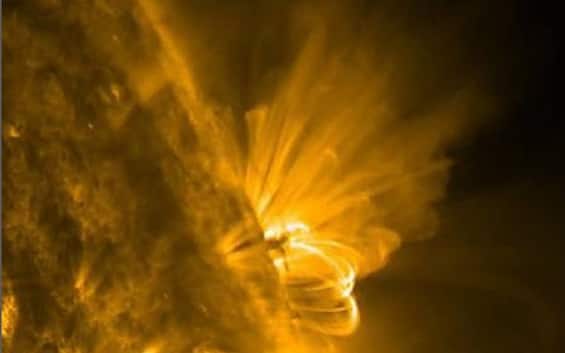 A solar storm is coming towards our planet in the next few hours. The National Oceanic and Atmospheric Administration (Noaa) bulletin warns of a “geomagnetic jolt”. In practice, matter detaches from the Sun’s crown which, in turn, generates a strong solar wind that also involves the Earth.

The gaseous material flows from a southern hole at a speed of 800 km per second into the solar atmosphere. It is a temporary disturbance of the Earth’s magnetosphere caused by strong coronal mass ejections. NASA defines them as “huge bubbles of radiation and particles from the Sun that explode in space at very high speed when the lines of the Sun’s magnetic field suddenly reorganize”. The radiation and particles emitted can trigger polar auroras, but also interfere with the communications network. It seems, however, that today’s is a weak solar storm, which should not cause significant blackouts.

The largest solar storm ever seen dates back to 1859, remembered as the “Carrington Event” from the name of the English astronomer Richard Carrington: it caused serious problems to telegraph systems all over the world and produced visible auroras at unusual latitudes, apparently as far as the Caribbean. If a similar event were to happen now, NASA experts explain, it would cause billions of dollars in damage and cause widespread blackouts, as was the case in 1989 with a solar storm across the Canadian province of Quebec, which caused a prolonged blackout.