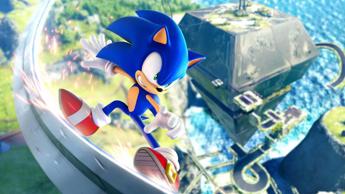 The blue hedgehog returns to its first open world, which will be launched in two editions

Sega has announced the release date of Sonic Frontiers, the new blue hedgehog game that brings it to open world gameplay for the first time and will be available on console and PC on November 8, 2022. Sega has announced that pre-orders for PS5, PS4 consoles will soon be open. , Xbox Series X | S, Xbox One, Nintendo Switch and Steam. It will also be supported by Smart Delivery on Xbox Series X | S and Xbox One. The two versions announced include pre-order incentives and various bonuses. In the standard editino in addition to the game we find the Adventurer’s Treasure Box with various upgrades, while in the Digital Deluxe Edition there are also various elements to face the game and even gloves and extra shoes for Sonic. On the occasion of the Gamescom in Cologne, in which it is possible to try the game in preview these days, Sega has also released a trailer that shows more details on this return, including the second island of the Starfall Island where the title is set, Ares.