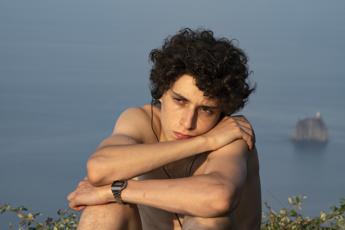 The autobiographical film is released in theaters on November 24 and on Netflix on December 15. “We laugh and cry. There is so much truth,” says the director.

“In this movie we laugh and cry. And I am as excited as at my wedding “. Paolo Sorrentino does not hide the emotion in the Neapolitan presentation of ‘It was the hand of God’, his new film, formerly the Silver Lion at the Venice Film Festival and an Oscar candidate for Italy, is coming in theaters November 24th, distributed by Lucky Red, and December 15th on Netflix. An autobiographical film that marks a turning point in the director’s cinematography (who returned to shoot in his Naples 20 years after ‘The One Man’) both from a stylistic point of view and for the courage to tell such an intimate and personal story linked to disappearance of his parents when he was still a teenager. “This was a film that could not be told like the others: you had to let your feelings and emotions talk. I left the actors freer, in search of the truth. And then I asked myself: let’s see if I can be like my other colleagues who get a lot by working a little“, he jokes.

With those who ask him how much of his real life has gone into the film, Sorrentino jokes: “I won’t give you the percentages but there is so much truth. Feelings and intentions are absolutely real, there is just some chronological forcing because I didn’t want to tell about a 20-year time span “, underlines the director then sheds light on the cinematographic ‘godfathers’ of the film, from Federico Fellini to Antonio Capuano, both quoted in the plot: “In this film there is no cinematic fetishism. If there is a reference it is to the director Troisi. It ends like a film by Troisi: My tutelary deity in this film is Troisi“, he says.

As for why he found the courage of this personal and different story just now, the director explains: “Maybe I did it now because I’m the right age to do it: I turned 50 last year and it seemed to me that I was old enough and mature enough to face a personal film. “The title of the film ‘It was the hand of God’ is linked to the well-known story of Maradona but also to the story of Sorrentino, because it was just a Napoli match di Maradona to prevent him from being with his parents in the mountains when they both died from carbon monoxide fumes. But with the Maradona in flesh and blood, both the film and the director in reality practically never met: “I saw him only once in Madrid but he was distracted.. He had spent a sleepless night and had been in trouble. I was never able to talk to him about the film. He was not an easily accessible man. My great regret is not being able to show it to him. ”

Produced by Lorenzo Mieli and from the same Paolo Sorrentino for The Apartment, group company Fremantle, ‘It was the hand of God’ is also in the words of Mieli the film of “courage”, even “a twist” in Sorrentino’s cinematography, which also faces his first collaboration with Netflix.

Protagonist of the film played by Filippo Scotti he is Fabietto Schisa, an introverted teenager who will look for an alternative to painful and “poor” reality in the cinema. “I hope that the young people who see it – explains Sorrentino – will get the fact that the film contains an idea of ​​the future. Never abdicating an idea of ​​the future. This future is always there, even if it is invisible at 17-18 years old. “While Scotti confesses that he had prepared himself for the shooting” by looking for my truth and then that of the character “and having prepared himself” by listening to the music and seeing the films that Paolo saw in the ’80s “.

While in the shoes of the parents there are Teresa Saponangelo and Toni Servillo. “I was promoted on the field by Paolo from a big brother, as he usually defines me, to a father. Twenty years ago – says the actor – I was with Paolo for ‘The extra man’ and in our long and fruitful collaboration it happened more time he told me that sooner or later he would find the right distance to tell this dramatic episode of his life and he said to me: ‘I will ask you to be a father.’ Of course it is exciting to receive such a proposal, but he never asked us to being exactly what is kept in the privacy of his memory. ”It gave us some insights. We had fun telling some dads who, feeling a little inadequate, end up being nice in their cialtroneria. And then there is this wife who is so fond of jokes that she makes the couple fun even if they go towards a tragic fate“, adds Servillo.

Instead, in the role of a crazy and beautiful aunt Luisa Ranieri: “I tried to work not so much on the fact that she was crazy – says the actress – but on the pain that this woman felt to the point of wanting to escape from reality. I am the discordant note, the different one, the problem. But also the woman outside the box, the one who can see beyond, who sees what is not there. In the script I had read what Paolo probably wanted from this character. And then I trusted completely. I never even asked Paolo if this aunt ever existed, it was so well written “.

And speaking of pain Sorrentino confesses that making a film about his private tragedy was somehow therapeutic: “I have already spent three months presenting it around festivals and always talking about it has made the pain become boring. And this is of great help. Getting bored of something is a good shortcut to not deal with it anymore… Unfortunately – he adds smiling – at the end of the film I have to listen to the stories of similar grief experienced by the spectators “.

As for the new race toOscar, an award that the director has already won in 2014 for ‘The great beauty’, Sorrentino relies on superstitious fatalism: “My attitude – he says – has not changed compared to 7 years ago. I’m just more aware that a lot of variables have to coincide to win an Oscar. The march is slow. You live for the day. You can only work your best and hope that these variables all point in the right direction, “he concludes.