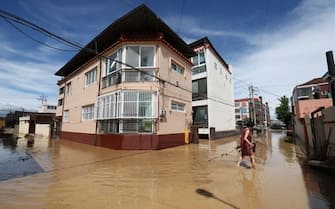 South Korea was hit by heavy rains and strong winds on Tuesday, but avoided the extensive destruction many had feared when Typhoon Hinnamnor, one of the strongest storms to ever reach its shores, went out to sea faster. than forecasters expected. The damage seems to be limited, but there are victims (the toll at the moment speaks of 10 dead and two missing). Floods have been isolated, albeit severe with downed trees and broken street lamps, and some 66,000 homes have lost electricity

Storms in August in South Korea

Cheong Tae Sung, a flood expert at the National Disaster Management Research Institute, a government agency, said the deadly floods that hit South Korea last month made authorities more alert to the dangers of a major storm. “Compared to the past, we have prepared a lot more before this typhoon, by suspending schools, delaying the working day, closing the roads and simply spreading the word,” he said.

But the storm itself, while powerful, did not leave as much damage as had been feared. By the time his eye reached the south coast at 4:50 am, Hinnamnor was bracing sustained maximum winds of 89 mph, making it the eighth strongest typhoon in South Korean history, but not the most powerful ever.

Hinnamnor crossed the southeast corner of the country faster than expected, returning to the open sea at 7:10 am, inflicting its strong wind and rain on the country for a shorter period of time than forecasters had feared.

The storm had formed last week and snaked through East Asia, traveling across the Pacific Northwest. Hinnamnor brought up to 37 inches of rain to parts of Jeju Island, a popular vacation spot off the country’s south coast. The worst of the floods appears to have hit the city of Pohang, a port city and steel production base in the southeast

By late afternoon, Hinnamnor was about 270 miles off the east coast of South Korea and continuing north-east. According to the Korean Meteorological Service, it was supposed to pass approximately 240 miles northwest of Sapporo, Japan at around 9pm on Tuesday.

The record-breaking flood that hit South Korea a month ago killed 15 people across the country, including a family of three who drowned in their semi-underground apartment. President Yoon Suk-yeol, who had been criticized for his response, had promised measures to prevent recurrence

As Hinnamnor approached, the government placed more emphasis on the need to evacuate. It sent 412 mobile security alerts related to typhoons, including evacuation orders, to different regions over a five-day period. And it closed more than 600 schools nationwide as a precaution while local airlines canceled about 250 domestic flights

More than 14,000 people fled their homes on orders from the government to evacuate high-risk areas, authorities said. After the typhoon landed, about 3,500 more people were evacuated, according to the Ministry of Interior and Security. Over the weekend, the government issued its most urgent typhoon warning, the highest level alert it has sent in five years.