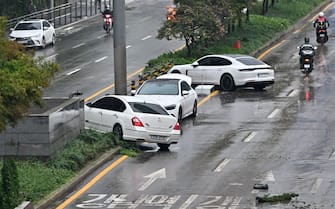 According to analyzes by the South Korean Meteorological Authority, more than 100 millimeters of rain fell every hour on Monday evening in the southern part of Seoul, in the nearby port city of Incheon and in some areas of the province of Gyeonggi (which surrounds the capital).

Three people who lived in a banjiha, the basement apartments portrayed in the Oscar-winning film “Parasite”, drowned at home.

Areas of the capital, the province of Gyeonggi and the port city of Incheon have seen more than 100 millimeters of rain fall, while in another district of the capital 141.5 millimeters have fallen, a record since 1942.

Residents of different areas were evacuated and bad weather caused electricity blackouts in the capital, as well as inconvenience to the metro and rail service

The bus station in the Gangnam district was completely submerged