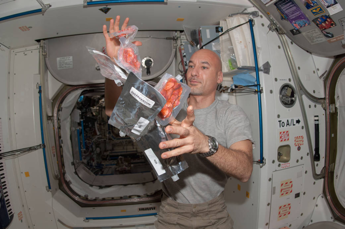 The Italian Ambassador Diego Brasioli at Adnkronos: “We combine tradition and innovation, in each recipe ingredients to be grown in space greenhouses”

Italian food flies into orbit with destination the Moon and the ‘launch pad’ is in Luxembourg. The Italian embassy in the Grand Duchy has in fact decided to promote Italian agri-food excellence by combining them with high space technology to transform them into recipes to be enjoyed in microgravity. “Italian foods such as Parmigiano Reggiano have always been present in extreme environments for their quality and ability to withstand over time and, in view of the next mission to the Moon, this time we wanted to create starred recipes made in Italy designed with ingredients that can be grown in space greenhouses ” the Italian ambassador to the Grand Duchy, Diego Brasioli, anticipates the Adnkronos next Wednesday promotes the “Italian Food in the Space” event in Luxembourg via streaming on the occasion of the sixth Week of Italian Cuisine in the World which this year has as its theme the “Tradition and perspectives of Italian cuisine: awareness and enhancement of environmental sustainability”.

“The idea of ​​space recipes also arose from the intense collaboration on space activities between Italy and Luxembourg and in view of the NASA Artemis program which will bring man back to the moon but our project also looks at the exploration of Mars, when a human being will go to the red planet “anticipates Brasioli who on the 24th will talk about this ‘space challenge’ with the professor Valentina Sumini of the Milan Polytechnic,
the Italian ESA astronaut Luca Parmitano, and the starred Chef Ilario Mosconi who literally invented gourmet space recipes that can be made and consumed in weightlessness.

“Like today at the end of November, the Foreign Ministry promotes the Week of Italian Cuisine in the World and the embassies are called to promote it and this year the specific theme is sustainability. we have decided to bring together cuisine, tradition, technology and innovation in the wake of sustainability “adds Brasioli explaining that “the conference – promoted in collaboration with the Italian-Luxembourgian CCIL-Chamber of Commerce – is dedicated to food in space and has the title “Italian Food in Space. New technologies and traditional quality products for sustainability and nutritional well-being in outer space”. At the center is the Italian contribution to the Mediterranean Diet and well-being of astronauts, with particular reference to the sustainability of food crops in the future lunar base “.

“There is an Italian tradition of national food in extreme environments, when I was in Pakistan – recalls Brasioli – there were many expeditions that brought foodstuffs suitable for eating at high and very high altitudes and some products were Italian such as Parmigiano Reggiano and or bresaola , products that do not perish easily “. Italy and Luxembourg underlines, “They are the only two countries of the European Union part of the Artemis project, the program developed by NASA, US commercial space flight companies and other international partners including the Italian Space Agency (ASI) and the ‘Esa, with the aim of landing the first woman and the next man on the moon by 2024 “. During the conference on the 24th, the Italian researcher Valentina Sumini, Visiting Professor at the Politecnico di Milano and Research Affiliate at the Mit Media Lab, presented her studies on hydroponic greenhouses on the surface of Moon and Mars, which recently won the “Nasa Big Idea Challenge”.

Chef Ilario Mosconi of the homonymous restaurant in Luxembourg with a Michelin star, reveals his original recipe for “Food in Space”, based on the ingredients of the hydroponic greenhouse and cooked with special techniques, promoting the nutritional profiles of the Italian culinary tradition and the authentic quality of its products. He also spoke at the meeting the astronaut Luca Parmitano, the first Italian Commander of the International Space Station, to tell his personal experience on eating habits in orbit and illustrate the challenges and new opportunities offered by space exploration. The conference will also be attended by astrophysicist Simonetta Di Pippo, Director of the United Nations Office for Outer Space Affairs (Unoosa), and Professor Antonino Salmeri of the University of Luxembourg.

In view of the space event, Fabio Morvilli, president of the Italo-Luxembourg Chamber of Commerce, also wanted to explain that “within the Italian System, the CCIL promotes, with the Italian Embassy, ​​food in space through the implementation of artificial intelligence, a sector in which the Luxembourg market attracts many tried and tested companies and numerous start-ups, including those of Italian origin. “Giorgio Saccoccia, president of the Italian Space Agency, and Marc Serres, president of the Luxembourg Space Agency bring their institutional greetings to the meeting on the 24th. Lsa) and Cecilia Piccioni, Deputy Director General of the Country System-Central Director for the promotion of Italian culture and language of the Ministry of Foreign Affairs and International Cooperation, to underline the action of the Country System in the promotion and protection of Italian agri-food, in connection with sectors with a high technological and scientific content.