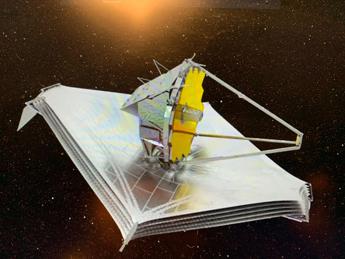 From Leonardo the space compasses that will guide the journey of the super telescope and key elements of the NirSpec instrument, by Thales Alenia Space a transponder developed between Rome and L’Aquila

Everything is ready for the launch of the James Webb super space telescope that will lead the knowledge of the Universe towards frontiers that scientists today consider “not even imaginable”. NASA, ESA and Canadian CNSA are preparing the count down and, at the moment, the launch seems confirmed for the for December 24th, at 13.20 Italian time. Today is the day indicated by NASA for the final review of the launch and, if it is a success, the transfer to the launch pad is scheduled for tomorrow.

Born about 30 years ago as a project idea, the “Next Generation Space Telescope” gradually gained the title of “Hubble’s successor” and in 2002 was titled to James Webb, NASA administrator during the Gemini programs, Mercury and Apollo and advocate for the Johnson Space Center control center in Houston, Texas. And a lot of Italian technology contributes to the success of the mission.

Also contributing to the ambitious space project is the Italian giant Leonardo who provided key elements of the NirSpec instrument for the Webb mission (Near-Infrared Spectrograph), the infrared imaging spectrograph that the telescope is equipped with, as well as stellar attitude sensors and Sun sensors, key components of the JWST Attitude Control Subsystem. For the NirSpec instrument, Leonardo has created a sophisticated cryogenic mechanism of high precision, the RMA (Refocusing Mechanism Assembly).

Developed to perfectly focus the camera in orbit, the RMA will guarantee a high image quality to the NirSpec, working at-234 ° C and moving its two mirrors, also designed and made by Leonardo, one hundredth of a millimeter at a time, on a stroke of only 6 millimeters.

“To make the mechanism capable of these performances, it was necessary to use very challenging processes” explain Leonardo’s experts. In particular, the RMA mirrors were worked with an extremely accurate polishing process in the Campi Bisenzio di Leonardo factory and subsequently subjected, in the Merate laboratories of the INAF-Astronomical Observatory of Brera, to a final ‘optical smoothing’ process. so that the shape reached by the optical surfaces does not deviate more than a few tens of atoms from that suggested by models and simulations.

Leonardo has also cooperated with NASA, ESA and CSA, the Canadian Space Agency, developing three Autonomous Star tracker – A-Str and two Sun sensors (Smart Sun Sensor – Sss), key components of the Jwst Attitude Control Subsystem (Acs). The SSS turns on autonomously during the launch and climb phase and is the main attitude sensor used after the launch vehicle is separated. This sensor provides critical attitude data to ensure the health and safety of the JWST telescope, even in non-nominal conditions. The A-Str units instead activate shortly after the launch vehicle separation and use the stars to collect attitude data.

Leonardo further explains that g
there A-Str, provide this data during critical mid-course correction maneuvers to ensure the Jwst arrives at operational orbit which is over a million kilometers from Earth. The correct attitude determined by the A-Str finally supports the telescope systems to provide stability and pointing precision necessary for the observation of space.

James Webb is the new space telescope intended to study the ‘evolution’ of the Universe and on board it also has a transponder developed in the laboratories of Thales Alenia Space, between Rome and L’Aquila. The joint venture Thales 67% and Leonardo 33% built the deep space transponder on behalf of Northrop Grumman Space Technology, the first industrial contractor, in its laboratories in Rome and L’Aquila, confirming its experience in the production of deep space transponders. started with the Cassini / Huygens missions, continued with the Mars Express, Venus, Rosetta, Lisa Pathfinder, Gaia and Bepi Colombo missions.