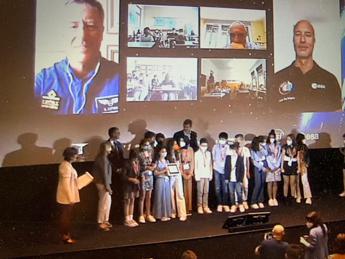 A pool of students has thus baptized the Earth Observation constellation that will be built in Italy thanks to the PNRR. Unpublished ‘questioning’ of the young winners to the White and Colao ministers.


The winners were awarded

today in the Auditorium of the Italian Space Agency where for the occasion the Asi organized a morning entirely dedicated to Boys, an event that has turned into an unprecedented ‘day in the classroom’. The young students were involved in a kind of lesson on space activities and on orbit missions. But not only.


The boys questioned the ministers of education, Patrizio Bianchiand technological innovation and digitization, Vittorio Colao, which is in charge of the Space, who went up on the stage of the ‘Luigi Broglio’ Auditorium of the ASI and talked with the students telling and recounting their experiences when they were schoolchildren at school. “He did not study engineering but I have always been attracted to the sectors that produced innovation” confessed Colao who then congratulated the young people who took part in the project: “Congratulations to the many students who took part in this competition. You too contributed. to the largest European program of Earth observation in low orbit “. A project, noted Colao,” that will allow us to make progress to combat climate change, prevent hydrogeological instability, keep air quality under control and support the most innovative startups and companies in the sector ” . “I hope – added the Minister of Innovation – that the new generations will look to Space as an industry that can offer them huge professional opportunitiesnot only for those who want to study astrophysics or space engineering, but also for all those who choose Stem matters thus contributing to the economy of our country, to the growth of Europe and to international collaboration in space “.

Minister Bianchi also chatted with ‘his’ students, confessing in turn that as a child he was “a sad and boring child”. “I did the middle School, then two years of scientific high school like this … then the third year they rejected almost all the classes and they did a mixed class and the world changed: I had fun like crazy. In the third, fourth, fifth high school we had a great time. Enjoy the school, boys! “He punctuated the Minister of Education. Bianchi also noted that “with the ‘Space for ideas’ competition, our students were able to participate and make a valuable contribution to a European space program which, with the resources of the Pnrr, it will have great importance in protecting the environment and supporting the economy “. Minister Bianchi then thanked” the Italian Space Agency, ESA and the Department for Digital Transformation for having given this great opportunity to our young people “. The president of ASI opened the award ceremony, Giorgio Sacco
ccia, in turn, he was asked to tell how one becomes ‘president’ of a space entity. “Space – said Saccoccia – is synonymous with the future” and “the future is young people and for this reason it is important to bring them closer to a highly innovative sector such as Space. And besides, the future belongs to them. We must invest in them. they will also be tomorrow’s ‘ambassadors’ of Space and will have the task of explaining with their language how space services, such as those of the new constellation Iristhey will be able to contribute to a better future for our, their planet Earth “.

The ESA Director of Earth Observation Programs and Chief Esrin also attended the award ceremony, Simonetta Cheli. “This project – he commented – represents a unique opportunity for Italy but at the same time for the whole of Europe. It is an extremely ambitious project, which aims to develop a new system based on a constellation of satellites made in Italy which, integrating with other existing European and national systems – such as Copernicus, Cosmo-SkyMed, Prisma – will allow monitor Italy
from space on a continuous basis “. Cheli underlined that” all the resulting information will then be made immediately available to all “and that”Italy is the first nation in Europe to undertake such an initiative and in ESA we really hope that others will follow “.

They also spoke with the students the astronauts-judges
Roberto Vittori And Luca Parmitano in video link, while Samantha Cristoforetti sent the boys a video message from the International Space Station. “The name of the new Earth Observation constellation is Iris and this will be the largest space platform in Europe” said Samantha who addressed the young people in the room: “Boys, girls, continue to deepen your skills in science and technology. : among you perhaps there are future astronauts “and” with hard work and a little luck even the most ambitious dreams can come true “. It was then the turn of astronaut Luca Parmitano to answer the children’s questions by addressing the great theme of space waste. “ESA is in the front row to find a solution to the problem of space debristo try to free the most important orbits around the Earth “and” it is a project still in progress “said Parmitano. Roberto Vittori instead recalled that one of the strategic moments in his career as an astronaut was” when I brought into orbit in 2011 the Ams experiment, an antimatter, dark matter hunter “hooked to the Iss. La satellite constellation Iris – what will become the most important European low-altitude Earth observation satellite space program – will be implemented in Italy and completed within five years with the support of ESA, the European Space Agency, and the Italian Space Agency thanks to the resources of the Pnrr. The goal of the constellation is to also support the Civil protection and others Administrations to combat hydrogeological instability and fires, protect coasts, monitor critical infrastructures, air quality and weather conditions. With ‘Iris’ finally, analytical data for the development of commercial applications by startups, small and medium-sized enterprises and industry sectors will arrive. (by Andreana d’Aquino)