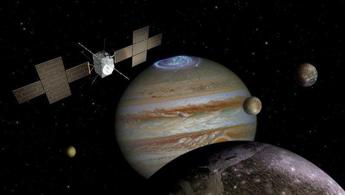 It will reach the Kourou base, launch into orbit scheduled for April. The ESA mission will study the conditions for the formation of planets, the appearance of life and the Solar System

The probe Juice – Jupiter Icy Moon Explorer of the European Space Agency, in which the Italian Space Agency has strongly collaborated, will leave the Toulouse facilities to fly to the Kourou space center in French Guiana from where, next April, it will leave for Jupiter. Juice’s goal, after reaching orbit around the gas giant in 2030, will be its icy moons: Ganymede, Europa and Callisto. The Italian involvement in this mission is extensive and in particular of ASI supported by the national scientific community, for which 3 Italian-led instruments have been created: the Rime Radar, the Janus camera, the Radio Scienza 3Gm instrument. Added to these is the strong Italian participation in the Majis spectrometer (Moons and Jupiter Imaging Spectrometer) of the French space agency Cnes.

The ASI underlines that the instruments were created thanks to a great collaboration of the national scientific community and of our industry but also through various international cooperations between the ASI and the Jpl/Nasa, the German agency Dlr, the French Cnes and the Israeli space agency, ISA. Jiuce will try to study the conditions for the formation of planets and the appearance of life and how the Solar System works. The comparative study of the three Jovian satellites in a single mission will allow us to understand the causes of their diversity, dominated by the influence of Jupiter. Juice’s main scientific theme concerns the possible habitability of the environments of giant planets.

Especially the Italian tools of Juice are Rhymes (Radar for Icy Moon Exploration), subsurface radar optimized to penetrate the icy surface of the Galilean satellites up to a depth of 9 km with a resolution of up to 30 m. For the Rime radar, whose Principal Investigator is from the University of Trento, a collaboration on the use and sharing of scientific data is also planned with NASA’s Jet Propulsion Laboratory (JPL). Janus (Jovis, Amorum ac Natorum Undique Scrutator), an optical camera to study the morphology and global regional and local processes on the moons and to map Jupiter’s clouds. For Janus, Leonardo has created, also thanks to the collaboration of the Partenope University of Naples, the high-resolution camera dedicated to monitoring the atmosphere of Jupiter and the study of its three frozen moons for the search for environments capable of hosting forms of life. The camera was also created thanks to the collaboration with the German agency DLR, which participated in the development through a bilateral agreement with ASI.

Another Italian instrument is 3Gm (Gravity and Geophysics of Jupiter and the Galilean Moons) for radio science comprising a Ka-band transponder and an ultrastable oscillator. The instrument will be used to study Ganymede’s gravity field up to the 10th harmonic and the extent of the internal oceans on the icy moons. 3GM also plans a collaboration with the Israeli space agency, ISA, which it has implemented USE (Ultra stable Oscillator) a radio science experiment. Also important is the Italian involvement in Majis (Moons and Jupiter Imaging Spectrometer), a hyper-spectral imaging spectrometer for observing the characteristics and minor species of Jupiter’s troposphere as well as for the characterization of ice and minerals on the frozen moons. Majis, under French responsibility, was created with a bilateral agreement between ASI and CNES.

As regards the industries, the creation of the instruments sees the involvement of both Thales Alenia Space and Leonardo. Leonardo also supplied the hyperspectral optical head to observe and characterize clouds, ice and minerals on the surfaces of the three moons. Juice’s solar panels are also Leonardo’s, the largest ever made for an interplanetary mission. The Italian contribution to the Juice mission, consisting of scientific instruments and more – he says Angelo Olivieri ASI delegate to the Juice Steering Committee – represents the state of the art both from a technological and scientific point of view”. “We are convinced that the joint efforts made in recent years will lead us to surprising results never achieved before and will strengthen the leadership role achieved by Italy in many sectors of the ‘planetary exploration” adds Olivieri.