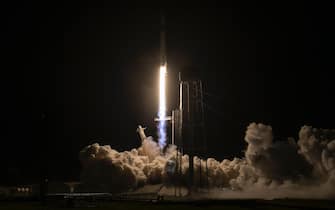 At 3.03 Italian it was launched from the Cape Canaveral base in Florida on Crew Dragon 3. There SpaceX shuttle with four astronauts on board it is headed for the International Space Station

NASA, Bezos-Musk dispute: man’s return to the moon is postponed

L’docking with the international space station is expected at 13.10 today and opening the hatch about two hours later

SpaceX, the return to earth of Crew Dragon 2

The launch of the four astronauts to the international space station with the Crew-3 mission, by the private company of Elon Musk, took place after a series of delays

Inspiration4, the landing stages of the SpaceX mission. PHOTO

L’orbital outpost is currently operational with only one NASA astronaut that will welcome the arriving crew, after the astronauts of the previous Crew-2 mission landed in the Gulf of Mexico last Sunday

SpaceX, the first 4 tourists in orbit have returned to earth

The Americans Raja Chari (pictured before launch), Kayla Barron And Tom Marshburn and German Matthias Maurer that form the crew of Crew-3 took off aboard a Crew Dragon capsule attached to a Falcon 9 rocket from Kennedy Space Center in Florida

The launch was greeted by applause in the SpaceX control room. The flight it had been postponed to October 31, first due to weather conditions, then due to a “medical problem” which hit one of the crew members. NASA did not say who it was but did report it was unrelated to Covid

Chari, a colonel in the US Air Force, commands the mission and makes his first journey into space, together with Barron and Maurer. Marshburn, a doctor, flew aboard a Space Shuttle in 2009 and a Russian Soyuz spacecraft on a 2012-13 mission. Barron, along with Chari was selected for NASA’s astronaut corps in 2017. Maurer, an engineer specializing in materials science, will become the twelfth German in the cosmos

Crew-3 is part of the NASA’s multi-billion dollar partnership with SpaceX who signed after the end of the Space Shuttle program in 2011 and aims to carry out human space flights of the USA. The quartet will spend six months on the ISS and conduct research to help inform future space exploration and benefit life on Earth.

THE scientific highlights of the mission include an experiment to grow plants in space without soil or other means of growth and another to build optical fibers in microgravity, which previous research has suggested will be of higher quality than those produced on Earth. The crew-3 astronauts will also conduct spacewalks to complete an upgrade of the station’s solar panels