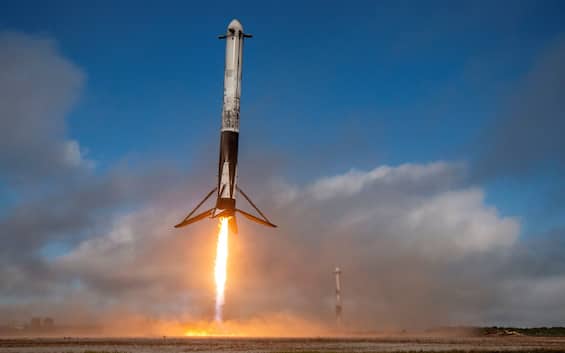 The launch of the SpaceX Falcon Heavy rocket for the USSF-44 military mission, commissioned by the US Space Force, which has brought at least two satellites into orbit, has successfully concluded in the past few hours. The launch, performed as part of the “USSF-44” mission, took place from Kennedy Space Center, Florida, more precisely from Launch Complex 39A. The last time a Falcon Heavy space rocket from SpaceX, a US aerospace company founded in 2002 by Elon Musk, was used was in 2019.

The launch of the SpaceX Falcon Heavy rocket took place yesterday, November 1st, at 14:41 Italian time. After the roar of the 27 engines of the first stage, two side boosters separated from the central part of the rocket in synchrony about 29 km above the ground, and then returned to the ground. Shortly thereafter, the same boosters restarted the engines and landed at practically the same moment, side by side, about 15 km away from the starting point. The central stage ended all its power to bring the satellites into their intended orbit, then finished its run offshore.

The loads of the mission

One of the payloads of the mission is a satellite called “Tetra-1”, a small prototype made by Boeing. The other part is represented by some satellites of which, however, the specifications or the purpose have not been revealed, even though they are military loads.