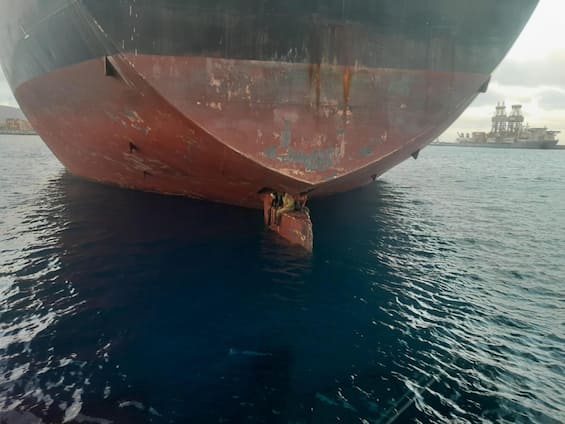 In order to get to Europe, three young African migrants, probably Senegalese, risked their lives traveling for 11 days sitting on the helm of a huge oil tanker which left Nigeria for the Canary Islands, where they arrived dehydrated and weakened but alive. They hid in a small space under the stern, just where the rudder fits into the ship, and where in heavy seas there would be no escape. As stated by the head of the maritime rescue center in Las Palmas, it is a place “certainly not suitable for hosting people in the open sea, where migrants ran the risk of dying from dehydration, drowning or hypothermia. Above all, it is a place which is almost always full of sea water”.

They will have to go back to Nigeria

The three migrants who arrived yesterday in Gran Canaria will have to leave the island after receiving health care: this was reported to ANSA by the Spanish Government Delegation to the Canary Islands, thus confirming local media reports. According to the Efe agency, in legal terms the three survivors are not considered migrants like those who arrive on boats, but as “clandestine passengers” on a ship; which is why, after being assisted for “moderate dehydration”, the whole group will have to return “to the port of origin”, which should be Lagos, Nigeria, without the possibility of staying in Spanish territory and at the expense of the corresponding ship agent.

The image went around the world

The image of the three men sitting on the rudder under the stern, with their feet less than half a meter from the water, taken by Salvamar Nunki’s sailors, went around the world. This is not an innovative practice: there have been six precedents in the port of Las Palmas de Gran Canaria alone in the last four years.