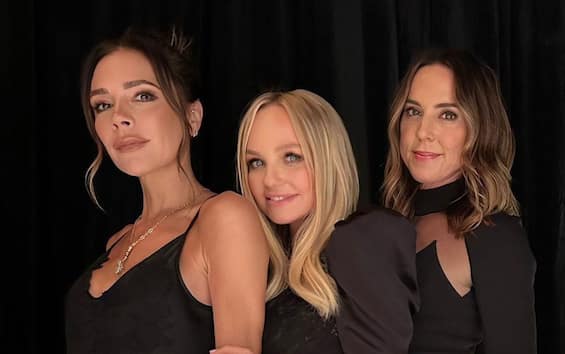 Fans of Spice Girls they return to dream, even if only thanks to a social post. Victoria Beckham shared some shots on Instagram with former bandmates Mel C and Emma Bunton on the occasion of the celebrations for the Geri Horner’s 50th birthday, better known as Geri Halliwell, in her sumptuous Oxfordshire home. The former Ginger Spice turned 50 on August 6 and had her party scheduled for September, but she postponed it due to the Queen’s death.

Victoria Beckham, the “reunion” with Spice

Over the weekend Geri Halliwell, the former Ginger Spice, reunited for her 50th birthday Victoria Beckham (Posh Spice), Mel C. (Melanie Chisholm, the former Sporty Spice) ed Emma Bunton (Baby Spice). The designer posted some photos from the celebration, including a sweet shot of herself, Mel C and Emma posing together, all dressed in black. The second photo shows instead Victoria and Emma embrace in a moment of affection. “I love you Emma and Mel” wrote Victoria accompanying the photos. Although she was not photographed together with her former companions, according to what was reported by the Daily Mail at the party it seems there was also Mel B.

The Spice Girls would be preparing the great return to the stage for 2023with a tour that he wants to celebrate 25 years of the album Spiceworld, which has sold a total of 20 million copies and of which a re-edition has just come out. In this new version, in addition to the original album, it is possible to find bonus tracks, some b-sides and a series of previously unreleased live recordings extracted from the archives of Virgin Records. With a post published on Instagram Mel B confirmed: “We are about to return. To all our fans get ready for Spice World 25has finally arrived. Spice Tour 2023! “. It will be very difficult, however, to see the group again Victoria Beckham. “I had a lot of fun with the Spice Girls – said the entrepreneur to Watch What Happens Live – But with everything I have to manage now, my brand, my beauty line and four children, I couldn’t commit myself to this too. “. During the broadcast, however, the former Posh Spice left a crack open. Victoria Beckham would be available for a reunion via holograms, as already arranged for ABBA. “This is a great idea – commented the former Spice Girl – This is a good idea”.