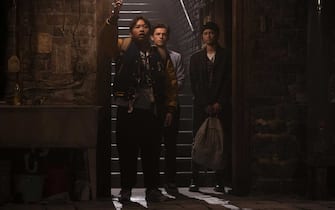 The film, which will be in cinemas starting December 15, picks up the story that it stopped in Spider-Man: Far From Home in which Mysterio (Jake Gyllenhaal) revealed Spider-Man’s true identity to the world

Spider-Man: No Way Home, from the leaks to the words of Tom Holland. What you need to know

Young Peter Parker is trying to get on with his life, but it’s a tough undertaking for a hero who would like to go unnoticed! For this he goes to the Sanctum Sanctorum of Doctor Strange (Benedict Cumberbatch), who asks to cast a spell that makes people forget his identity

Spider-Man: No Way Home, the first poster of the Marvel film

However, things will not go as planned and the two will find themselves having to deal with the unpredictability of the Multiverse!

Spider-Man, the new official photo from the No Way Home movie to be released in December

Spider-Man: No Way Home is the twenty-seventh film in the Marvel Cinematic Universe (MCU) The film is a co-production of Columbia Pictures and Marvel Studios and distributed by Sony, it is the sequel to Spider-Man: Far from Home (2019)

Spider-Man: A New Universe 2, beware of the Multiverse: PHOTOS