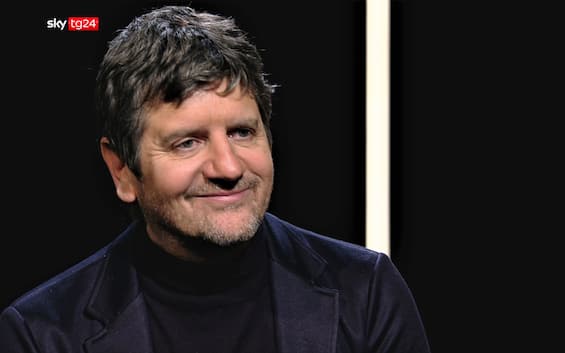 It is Fabio De Luigi the protagonist of the new episode of “Stories”the cycle of interviews with the main interpreters of the show by Sky TG24 (THE SPECIAL). Guest of the deputy editor of the newspaper Omar Schillacidirected by Robert Contactsthe actor and director talks about himself in “Fabio De Luigi – There is sympathy”on air Thursday 29 December at 21 on Sky TG24 it is always available On Demand. From his latest film to the origins of his characters on stage and on TV with Gialappa’s. In between: childhood memories, fears won, love for comedy and cinema and lots and lots of sympathy.

His second film as director is due out on January 1st, it’s titled “Three too many” (production by Warner Bros. Entertainment Italia, Colorado Film Production and Alfred Film, distributed by Warner Bros. Pictures, story by Michele Abatantuono, by De Luigi himself and Lara Prando). Fabio De Luigi directs and performs a comedy that lightly deals with the theme of the choice of being or not being a parent. Next to De Luigi, Virginia Raffaele. In the cast also Fabio Balsamo, Marina Rocco and Barbara Chichiarelli. “We are in a surreal world of contemporary fairy tale – tells – which talks about a couple, made up of me and Virginia, of resolute people who have legitimately chosen to live their lives without children. They hang out with friends who instead have decided to have friends, with the attitude of those who set themselves up as great connoisseurs and are ironic. At one point, for a sort of magic, they find themselves having three little boys at home and try to understand who these three are who actually recognize them as parents”. “Almost a leap in size – he continued – in which we, Virginia and I, also have the opportunity to see what our life would have been like if we had decided to have children”.

Simplicity and irony in the amusing chat that retraces some of the stages of his life and career. Her birthplace is: “Santarcangelo of Romagna. The environment was good, I had a good time, I gave several stars to my parents. Also on TripAdvisor. It was the family I recommended, sadly it is no longer there. But it’s in my heart.”

Third child, a school career between the art school and the Academy of Fine Arts (“but intimately I wanted to do what I’m doing today”) until you get to Gialappa’s: “In reality, I arrived at Gialappa’s after about ten years of live things. But that was an important television first time and it was what I was waiting for. It was the kind of language that I felt suited my type of comedy best. In fact, we worked together for many years”. The study of characters such as the historians Olmo and the engineer Cane and all the others. And then the cinema. Many films, three cinepanettoni, happy family by Gabriele Salvatores (“A very good and courageous director who loves actors very much“), Ten days without mom by Alessandro Genovesi and much much more. And returning to “Three too many”, where the theme of fear is also addressed, being a parent was precisely one of his greatest fears: “I won it because I felt that, as it happened, it could be something I wanted to do”. “I feel good as a father – he added -. I like it, I’m very happy to have become a dad. It is a dimension that evidently belongs to me”. While the fear she never got over is “that of the stage, a little performance anxiety. One of the recurring nightmares is, still today, that I have to go on stage and I don’t know what to say. Fortunately, this does not happen in reality. But I’ll never get over that fear there, I think”.