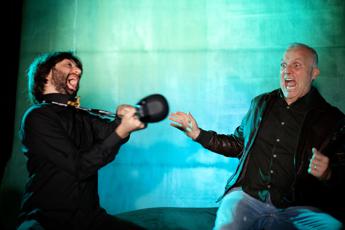 From Sicily to Val D’Aosta, from the large theater to the basement, from the big city to the smallest village, the multifaceted artist Max Paiella recounts his journey through time to the places where he has been to perform.

Thus was born “Stories of a storyteller”, which will be staged at Golden Theater from tomorrow to December 18th. And just like an ancient storyteller Paiella illustrates a large amount of stories that tell Italy with the help of Flavio Cangialosilively multi-instrumentalist and musician, in a show that is enhanced by the aid of narration and graphic illustrations “fresh as fresh as a delicatessen who offers you that sweet sweet ham that only he has!”.

The province and the cities narrated with their protagonists through this strange meeting place, the theatre, with the usual comic, irreverent, satirical and exciting language in a journey based on the stories of that Italian who worked the land, who emigrated, who was looking for work in the city, who didn’t talk about his origins despite being proud of it, who understood the importance of culture despite having little of it. In a nutshell, the Italian who built the theater himself, that Italian we would like to resemble even if by now he seems far from us. This journey will allow every spectator and every territory to feel like a protagonist.