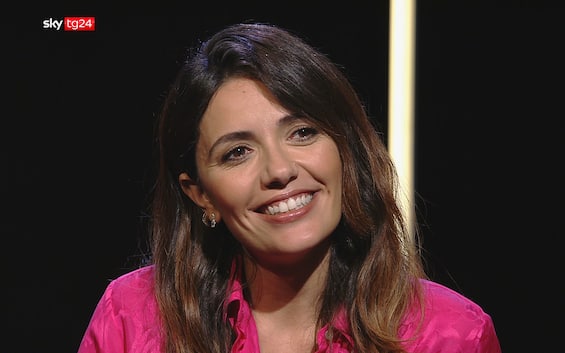 It is Serena Rossi the protagonist of the new episode of “Stories”the cycle of interviews with the main interpreters of the show by Sky TG24 (THE SPECIAL). Guest of the deputy editor of the newspaper Omar Schillacidirected by Robert Contactsthe actress tells herself in “Serena Rossi – Ask me if I’m happy”on air Saturday 24 December at 18:30 on Sky TG24 it is always available On Demand. At Christmas on Sky with the comedy “Beate te”. But also in the theatre, on TV, in the cinema, in dubbing. The career of an artist (and of a woman) who has done everything without ever losing her smile.

The new Sky Original comedy “Beata te”, directed by Paola Randi and produced for Sky by Cinemaundici and Vision Distribution, will arrive on December 25th on Sky Cinema and in streaming only on NOW. It deals with the delicate theme of motherhood with light tones and of free choice. He will have his own protagonist Serena Rossi (Ammore e malavita, Song ‘e Napule, Sadness is a light sleeper). Next to her Fabio Balsamo ((Im)perfect criminals, Generation 56 k). The cast also includes Paola Tiziana Cruciani, Gianni Ferreri, Valentina Correani, Elisa Di Eusanio, Corrado Fortuna, Emiliano Masala, Alessandro Riceci and little Caterina Bernardi.

“In my opinion, it’s just an opportunity to spend an evening on the sofa with the family, to have a lot of laughs and also to reflect on important issues”, said the actress. “I play Marta – he continued – a woman, a theater director who with difficulty in her life has tried to establish herself. You are finally going to make your debut with Hamlet in a very important theatre. She doesn’t have a partner, she has lots of friends, she has no children, she’s alone and she’s fine like this. And just on the evening of her 40th birthday, the Archangel Gabriel arrives at her house”.

Spontaneity and stories in the sunny chat that retraces some of the stages of his life and career. Born in Naples: “In a district called Miano which is exactly between Capodimonte, where there is the Reggia, the forest and Scampia”. At the age of six she already presents marriages in the family and “around the age of 13 I started singing at parties, weddings and in a pub in Sorrento on Saturdays with a guitarist friend of mine”. Hence the long seriality of “A place in the sun”: “It was very important to me, it gave me popularity, economic independence and that’s where I met my partner”. Then the theatre, musicals, TV, cinema with the Manetti Bros (“They were the first who believed in me thinking about the cinema”), TV series. “I like being free: moving from Raiuno’s Friday night TV show to podcasts. I really like to change and face challenges that make me very scared but that excite me at the same time”. There are no dreams in the drawer: “But there are some things I would like to experience”. And she has a passion for X Factor: “The things I’ve done have always come by themselves. The only thing I asked my agent was that I would really like to be a judge, even if maybe I’m not right for that role. Thursday night is always a party for me when there is X Factor”.

In “Beata te” as well as having fun there is also the theme of motherhood and the biological clock: “We are in a country where assisted procreation is only legal for heterosexual couples. So if you’re single or if you’re gay, maybe Archangel Gabriel is really the only chance there is if you want to become a mom at some point.”. “Some women feel motherhood, some don’t. I firmly believe in the free choice of each of us. I didn’t think about it but in a very strong and very stable relationship it came naturally to me”. For Rossi: “A child is always a gift. Unfortunately – he continued – working women who are also mothers have a harder time. I often hear stories of women who have just been asked not to become mothers or who have been fired when they say they are pregnant. They also advised me against it due to my growing career. But I have to say that since Diego arrived, my journey has definitely taken off».