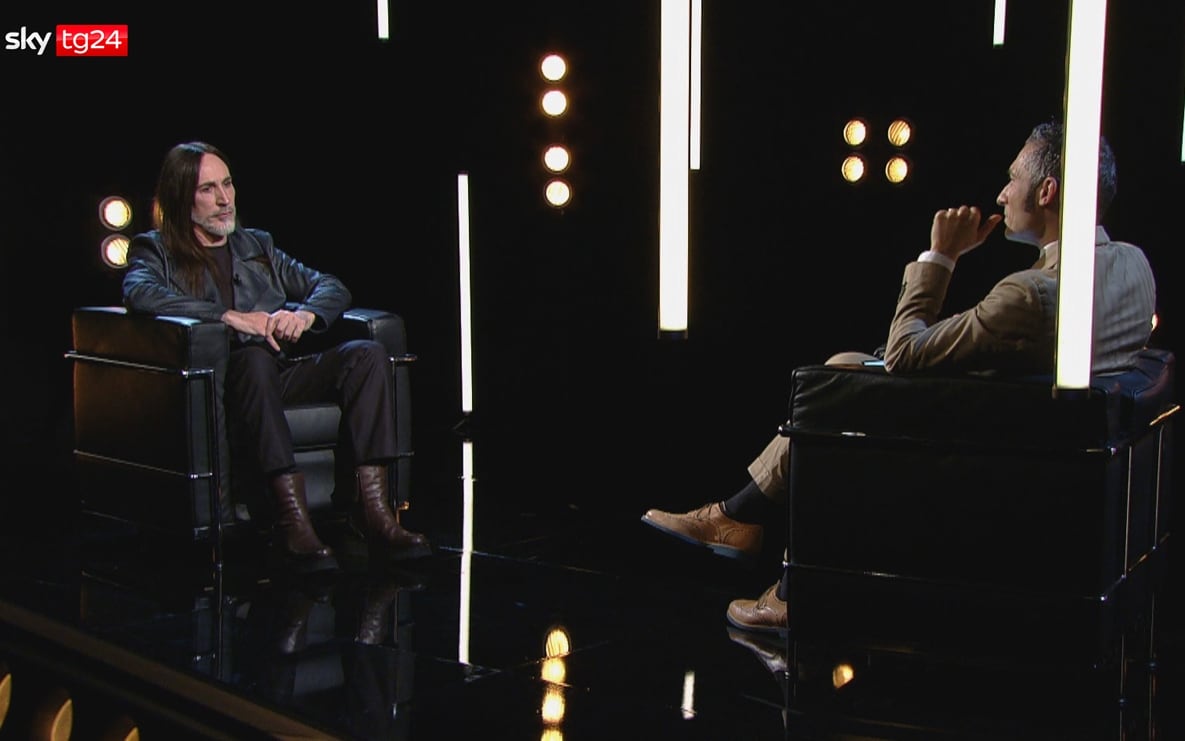 AND Manuel Agnelli the protagonist of the new episode of “Stories”, The series of interviews with the main interpreters of the show by Sky TG24 (THE PODCAST). Guest of the Deputy Director of the newspaper Omar Schillaci, the Milanese artist talks about himself in “The talent of Manuel Agnelli”, on air Monday 29 November at 9 pm on Sky TG24, Saturday 4 December at 1.40 pm on Sky Arte it is always available On Demand. Directed by Francesco Venuto, the interview, accompanied by some of his greatest hits, is a succession of reflections and anecdotes from professional life by the Afterhours frontman (“I never thought ‘I did it’, but in 1997“The album was released”‘Are you afraid of the dark?’ and the clubs began to fill up with people who were just like us: they weren’t a general audience, but people we recognized ourselves with and vice versa, and with whom we talked after the concerts. They were our peers who felt the same things as us. At that moment I said ‘I did it’, but I did it to do what I wanted, to communicate with the people around me, and not to make a career“) And private (“as a child I spent hours arranging the toy soldiers, the small ones, in tin, in crazy, endless formations, and then throwing them down, miserably, with marbles or stones. Let’s say that ‘Building to destroy’, a song I wrote, comes a little bit from that kind of inspiration“).

talent according to Manuel Agnelli

Songwriter, musician and record producer. These are the main names with which it is defined Manuel Agnelli, and to which, for some years now, has been added that of television personality or, for fans of the small screen, of judge of ‘X Factor‘, the talent show produced by Fremantle Italia and broadcast all Thursday at 9.15 pm on Sky One. In a role in which two extremes often coexist, being both fearful and empathetic, one of the purposes of ‘supreme Manuel’, so called by some members of his team for this fifteenth edition, the band ‘Bengala Fire’, has always been, as a judge, that of “convey the experience. What I have learned I want to pass on to these guys, and then they will do what they want with it. From the judge’s point of view, yes, there is the part of the show that is still fun, stimulating, I learned a lot of things about television and that way of doing television, but I find my sense precisely in transmitting the experience. that I had“. However, knowing how to sing and play is not always enough, talent is something to be exploited to the maximum of one’s possibilities and to bet on. In this regard, the Gospel parable of the talents to which reference was made during the interview is quite explanatory. In some way, with the right proportions and given the work carried out with ‘X Factor’, this is the talent that Manuel Agnelli is looking for in his boys, that is to see them make the most of the abilities, the gifts they enjoy, given that “talent is a precious thing, even if compared to this in Italy we are a bit strange since we tend to pull everyone down, to think small, to think that the artist should be humble, but art is the opposite of humility: if one thinks he has something interesting to tell, whatever it is, he is not humble. Humility is a bit of a strange concept, as we understand it in this country, but in reality I think it is, like so many other things, a way to control people.“.

from talent to martial arts, from cinema to music

Talent, in the case of Manuel Agnelli, rhymes with passion. Or rather: with more passions. Dynamic shooting rather than mixed martial arts, all loves that the artist has cultivated over time, despite some back and forth, because “I don’t know why, but from an early age I’ve always been interested in having some control over my aggression. Being in control has given me tremendous inner peace, which I have actually only experienced when playing in concert. I did Savate, French boxing, for fifteen years, also taking part in matches when I was a little younger. Then I stopped even though I really missed practicing such a thing, and so I started doing MMA again: in stricking I remained decent, while in Brazilian Jiu-jitsu, in the fight, I make people laugh, but it’s a lot of fun. I am a great fan, I train for a week and stop for another three weeks due to injury“. The list of passions reveal a multifaceted intellectual and artistic profile, and also quite hungry, both when it came to the organization of festivals like the ‘Tora! Tora!’, “to reiterate that there was an Italian music scene that was not unrealistic, given that the groups that performed played in front of thousands of people”, Which when it comes to books, cinema and music. Agnelli, in particular, is linked to the universe of the big screen, as well as to that of soundtracks, so much so that he has ventured into an actor’s rehearsal: “we went to shoot in Romania, I tried to play a small part in a western. Among other things, it was also a lot of fun because, dabbling with dynamic shooting, I use pistols that are those of today, so when I arrived on the set I said to the gun masters ‘I can shoot, don’t worry’, and they, Romanians , with an unlikely accent, they asked me ‘what gun do you shoot with?’ I replied with a Glock, and they laughed because they were rightly shooting a western and completely different guns were used.“. In short, going from the ‘supreme Manuel’ to the ‘omnivorous Manuel’ is an instant.

About music, on the other hand, the leader of ‘Afterhours’ – standard-bearer, together with Marlene Kuntz, of the Italian alternative rock – let himself be identified through the musical genre “it matters relatively little now. It was my reason for living, while now it no longer means anything because it hasn’t been that thing for so many years“. But when was this project born? In 1986, to give a temporal reference, but probably, the artist said, “during one of the endless jam sessions we did between us, just to play. Me, Lorenzo Olgiati and Roberto Girardi, who were respectively the first bassist and the first drummer of ‘After’, we said to ourselves that what we were hearing sucked and that we should have made a group, to do something good. There was a supreme good between us, we were a real band, made up of people who shared everything, even the girl. Creating a band, at that time, was our shell with respect to the world that as teenagers, of course, didn’t understand us. The nice thing is that if you liked someone, on a personality level, he became your bassist, your guitarist: it was not important to know how to play, and this is a great thing that punk culture has passed on to us.“. Today Agnelli defines the Afterhours as a “musical project“And not a band, because it is composed”by musicians who come and go in the midst of other projects, even if it still maintains a very precise identity. I have always been against forming a band that would make a reggae record once and an electronic one, dance, another: for me it makes no sense, let’s change brand and project” at that point. “After do this. It does not mean that it is the only thing I am interested in doing, but it is simply what, for now, perhaps, I have succeeded best“.

In closing, the singer-songwriter anticipates something of the solo project he is working on, “almost a crazy thing. Having changed many formations, after all even with Afterhours I am always and only left, I felt I had to take all the responsibility for the music I make, and to have all the psychological freedom to do, from A to Z, what I really I wanted“. Responsibility and freedom, two things that according to Manuel Agnelli “they fit together very well“.