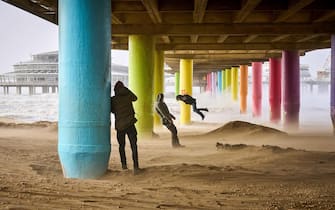 Yesterday, Friday 18 February, the storm hit the UK before reaching the European continent with violent gusts of wind and huge waves. In addition to the victims, there were many inconveniences and damages

The Eunice storm in the UK: photos

Eunice also created a chaos in connections throughout North Western Europewith hundreds of flights, trains and ferries canceled due to high winds

Eunice hit Europe less than 48 hours from another disturbancenamed Dudley, which had resulted in at least six deaths on the continent

In the Netherlands 4 people diedaccording to the Dutch emergency services, for falling trees or accidents during the passage of the storm, which triggered the highest alert level

In The Hague, dozens of houses have been evacuated for fear of the collapse of a church tower (in the photo, other damage in the Netherlands)

In Irelandthe first country affected, a 60-year-old man died in the south-east of the country (pictured, people working to secure a building in the Netherlands)

TO London, a woman of about thirty she was killed by a fallen tree on the car in which he was traveling in the passenger seat, while a man in his fifties died near Liverpool in an accident resulting from debris falling on the windshield of the vehicle in which he was standing

In Belgium, a 79-year-old Canadian man who lived on a boat in the Ypres marina died after falling into the water while trying to retrieve objects, local police told AFP

In England, on the Isle of Wight, one was registered gust of 196 km / hunprecedented, and others at more than 110 km / h inland, including at London Heathrow airport

Eunice hit twenty records in particular on the British Isles, without discounting a metropolis the size of London, struck for the first time by the deadly danger sealed by the red alert since the current warning system was introduced in the United Kingdom from the Met Office 11 years ago (pictured, damage to the coverage of the famous O2 Arena)