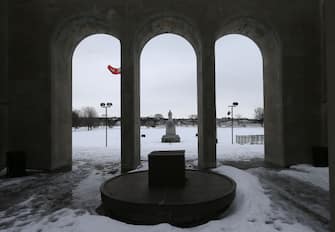 Usa, over 60 dead from the Arctic storm. The Buffalo area is hardest hit. PHOTO

The Canadian town, located on the banks of the Niagara Riveris connected to Buffalo and the United States by the Peace Bridge

The area of ​​Erie County, in the New York statewhose capital is Buffalo, was by far the one most affected by the frost wave, counting at least 38 dead out of about sixty total across the United States

Polar cold in the USA: the spectacle of frozen Niagara Falls

Only five more times in history had occurred the freezing of part of Niagara Falls, whose enormous volume of water (3160 tons per second) does not allow them to freeze completely

On the Canadian side of the river, the situation appears equally complicated, with many homes that have turned into authentic ones ice sculptures

In the days of Christmas temperatures plummeted, settling steadily for many hours around the -20° Cwith consequences that were not long in coming and which now appear evident

Only partial good news, because thawing could bring a dowry real risk of floodingeven if the experts calm down on the fact that, in this case, they will be small-scale phenomena

In the meantime, thanks to the clear weather again, the residents have begun to take photographs throughout the city, which has turned into a real “Winter Wonderland”