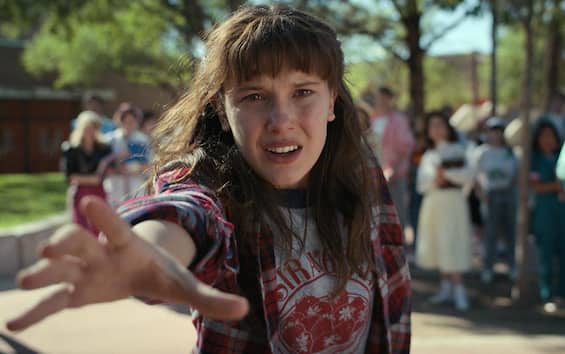 Actress Millie Bobby Brown has revealed that she has a secret dream: being a screenwriter. She actually has never said such a thing, but lately during the interviews she comes up with script-themed ideas, sometimes quite enlightening, it must be admitted …

Eleven interpreter / Jane Ives speaking with Total Film she expressed a desire to write herself an episode of the television series that made her a star, Stranger Things. Not just any episode but the final episode, which the actress would like to make a musical.

“I’d like to write the final episode! I’d make it a musical, ”Brown told the microphones of Total Film. “But, you know, they don’t entrust it to me, even though they should [ride]. Believe me: I could do the ending of Stranger Things and that would be great. I think it should be like ‘It’s always sunny in Philadelphia’. Have you ever seen the musical episode? It should end like this: a musical episode ”, these are the words of the actress.

Last September Millie Bobby Brown gave other script-themed tips… Interviewed by The Wrap, he said: “We need to start killing people. We must have the mindset of game of Thrones“. The actress had also added, not without irony, the following words: “Kill me! They tried to kill David and brought him back! ”.

Colleague Maya Hawke had also joined the chorus, saying that too, in her opinion Stranger Things it has too many characters, and that someone really needs to get rid of it …

The TV series set in the 80s has an infinite fandome and is preparing for the fifth season. All the characters present since the first episodes are still there, alive and well in short.

Maya Hawke, daughter of Uma Thurman and Ethan Hawke who plays Robin in the series, agreed with her colleague. And both are even willing to agree to the elimination of their characters, for the sake of the series.

Hawke has stated that he would be happy if Robin was killed during the fifth and final season of the show currently in development. “Well, it’s the last season, so people are probably going to die,” the actress told Rolling Stone. “I’d like to die and have my hero moment. I would like to die with honor, as any actor would. But I love the way the Duffer Brothers love their actors. The reason they write so well for me and everyone else is because they fall in love with their actors and their characters and don’t want to kill them. I think it’s a nice quality they have, ”she added.

“I don’t think he should have died, but I think the show has too many characters,” Maya Hawke told Vanity Fair referring to Eddie Munson, one of the characters who entered the fourth season.
The debate began after the party with Millie Bobby Brown, who jokingly said that if the cast were to take a group photo on the red carpet they would barely succeed. “The Duffer brothers are too sensitive to kill their characters, We have to do how Game of thronesBrown had said.

For their part, Matt and Ross Duffer stated the following during the podcast host Happy Sad Confused: “We explored all the options in the writing room. If you kill Mike, it’s like … it’s depressing … We’re not Game of thrones. This is Hawkins, this is not Westeros ”.
In short, the characters of Stranger Things they will discover it only by living (to quote Lucio Battisti). And who knows: maybe they will find out only by dying … We’ll see.

For now, the series finale remains top secret. The only detail that is given for sure is that the fifth season will be characterized by a time jump.
“I’m sure we’ll take a time jump,” Ross Duffer told Tv Line. “Ideally, we would have liked to have shot Seasons 4 and 5 one after the other, but there was no feasible way to do it. So these are all discussions we will have with our writers when we start writing. Believe it or not, we’re still working on season 4. We’re trying to finish the last two episodes, they’re so great. “