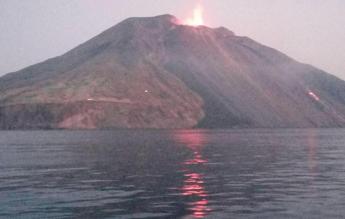 “We read bombastic headlines in the newspapers. The reality is that there was an important lava flow that caused a one and a half meter wave. An event that is part of the normal activity of an active volcano. The situation is calm at the moment “. This was told to Adnkronos by Rosa Oliva, president of the pro loco ‘I love Stromboli’, after the new activity of the volcano. An eruptive phase with an overflow of lava from the northern crater area and a pyroclastic flow that rapidly traveled the Sciara del fuoco reaching the sea, accompanied by collapses and landslides along the wall of the volcano. Phenomena that generated a tsunami wave that did not, however, cause damage to people or things. Yesterday evening the Civil Protection Department ordered the passage of the alert from yellow to orange level and the activation of the pre-alarm operational phase.

“It is normal for Civil Protection and Ingv to keep their attention high and for precautionary ordinances to be issued – adds Oliva -, but from here to talk about ‘island in flames’ there is a lot. We didn’t even hear the roar … “. Today, the schools on the island remained closed and as a precaution, the volunteers distributed masks “in case they were needed”, but “the night passed quietly and there was no ash fall so abundant as to cause inconvenience”. In short, for the president of the Pro Loco ‘I love Stromboli’ it is a “normal paroxysm”. “The Sciara del fuoco is in a situation of precarious stability, it is right that there is attention and prudence, but not alarmism”.

A position also shared by Carolina Barnao, delegate of the mayor for Stromboli. “What happened is absolutely normal, we must not forget that Stromboli is an active volcano – he tells Adnkronos -. What happened a few months ago was repeated when a pyroclastic flow generated instability of the Sciara del fuoco. The system of tsunami prevention and warning worked perfectly: we saw the column of black smoke rising from the volcano and at the same time we heard the sound of the sirens warning of the tsunami risk”. Eight people have been asked to leave their homes. “Their homes are located on the coast line, in a red zone due to tsunami risk. A precautionary measure”. In short, no alarm among the inhabitants. “There is the right attention but no alarm. Life goes on regularly, the ashes raised have poured over Ginostra, on the rest of the island there have been no particular inconveniences”. (by Rossana Lo Castro)