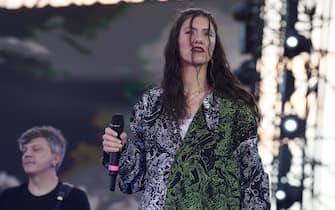 Elisa, second classified in the last edition of the Sanremo Festival, will hold four more concerts in August: on the 4th in Palmanova, on the 6th in Follonica, on the 25th in Castiglioncello and, finally, on the 27th in Olbia.

Three dates for rapper Fabrizio Tarducci alias Fabri Fibra, who will perform tonight 3 August in Catania, then double date in Sardinia on 15 in Olbia and 16 in Alghero

Waiting to see you again as a professor at Amici, Arisa will have a busy August with the following dates: 3 in Isola di Capo Rizzuto, 5 in Civitanova Marche, 7 in Contursi Terme, 11 in Paliano, 13 in Cinquale, 14 in Fondi, 16 in Pozzallo, 17 in Piazza Armenia, 19 in Montesilvano and 28 in Salsomaggiore Terme

Blanco, winner of the last edition of the Sanremo Festival with Chills together with Mahmood, will perform on three dates in August: this Wednesday the 3rd in Matera, the 4th in Gallipoli and, finally, the 6th in Cattolica

Music: Blanco, success for a concert at Villa Manin

A busy August also for Irama, a singer launched by Amici, who has seven concerts scheduled. We start tonight Wednesday 3 August in Jesolo, then 5 in Monopoli, 6 in Marina di Ginosa, 8 in Alghero, 18 in Isola di Capo Rizzuto and 20 in Diamante.

Even for the singer-songwriter Ermal Meta a non-stop August is looming. Tonight Wednesday 3 August is expected in Udine, then we will be able to listen to it on 8 in Gavorrano, 9 in Forte dei Marmi, 10 in Gatteo, 12 in Castellana Grotte, 14 in Serra S. Bruno, 16 in Pollina , on the 17th in Zafferana Etnea, on the 19th in Vibo Marina and on the 20th in Roseto Capo Spulico

A couple of dates for Tommaso Paradiso, former frontman of TheGiornalisti, who in August will perform on 21st in Roccella Jonica and on 26th in Taormina

The duo made up of Francesco De Gregori and Antonello Venditti will continue their long tour also for the whole month of August. It continues this evening on Wednesday 3 August in Villorba, followed by 10 in Chieti, 12 in La Spezia, 17 in Cattolica, 19 in Fasano, 21 in Lecce, 23 in Roccella Jonica, 25 in Palermo and, finally, double date in Taormina on 27 and 28 August

The artist Ana Mena will perform tonight on Wednesday 3 August in Gallipoli, where she will return to sing on the 17th. In the middle, the singer will hold concerts on August 4th in Gabicce Mare, on 5th in Venice, on 11th in Almeria (Spain) and on the 13th in Caceres (Spain)

Fiorella Mannoia is one of the icons of Italian music and is expected by a series of concerts in August. On the 5th he will perform in Vercelli, then on the 7th in Gualdo Tadino, on the 8th in Lignano Sabbiadoro, on the 10th in Asiago, on the 13th in Lecce, on the 14th in Ginosa Marina, on the 16th in Cetraro, on the 17th in Maiori, on the 19th in Syracuse, 20 in Bagheria, 21 in Partanna, 23 in Baia Domizia and 25 in Rossano

Lorenzo Cherubini alias Jovanotti continues with his Jova Beach Tour throughout August. The stages are 5 and 6 in Lido di Fermo, then 12-13 in Roccella Jonica, 19-20 in Vasto and 26-27 in Castelvolturno

Malika Ayane will start performing in August on Friday 5 in L’Aquila, and then move on to Vibo Marina on 7, Matera on 9, Paestum on 13 and Pescara on 16.

The artist Achille Lauro will be touring all over Italy in August. On the 5th he will perform in Roccella Jonica, then on the 7th in Lecce, on the 8th in Bisceglie, on the 13th in Arbatax, on the 20th in Civitavecchia, on the 26th in Osimo and on the 27th in Gubbio

Achille Lauro, a lot of energy on the stage of the Milan Summer Festival

Giusy Ferreri will sing on August 8 in Foggia, then on 11 in Pallagorio, on 14 in Giulianova and on 26 in Celano

Many dates in August for the singer Noemi, who will perform on the 5th in Sammichele di Bari, then move on to L’Aquila on the 7th, in Recco on the 9th, in Teramo on the 12th, in Brolo on the 15th, in Salemi on the 16th, in Presicce on the 19th, in Oliena on the 23rd and in Marciana Marina on the 27th

The singer Rkomi will sing on August 5 in Majano, then on the 18th in Bellaria-Igea Marina, on the 20th in Alghero, on the 27th in Paestum and on the 28th in Servigliano

The young singer Madame will perform on August 10 in Alghero

After the incredible success of the Brunori Sas Tour 2022, the singer-songwriter continues his journey in music by staging a show that is the result of long work, a link between past and present of his musical history, in the Brunori Sas Tour Estate 2022, treading the stages of the most important Italian festivals and arenas: 4th at the Ancient Theater of Taormina, 6th at Locus Festival in Fasano, 13th at Ascoli Piceno Summer Festival and 28th at Acielo Aperto in Santa Sofia

Margherita Vicario’s tour in August will be on the 12th at the Sziget Festival – Budapest; on the 19th at Tagghiate Urban Fest – Lecce; 21st at Lightblue Festival – Valley of the Temples; on the 28th in Prato; 31st at the Beat Full Festival – Palermo

After the resounding success of the indoor tranche of the WHERE WE WERE LEFT TOUR produced by BPM Concerti and Trident Music, the NUCLEAR TACTICAL PENGUINS are replicating “in the open air”: 8 August Verona @ Arena di Verona; on the 11th in Baia Domizia (CE) @ Arena dei Pini; 13 in Cattolica (RN) @ Arena della Regina; 15 in Olbia (SS) @ Red Valley Festival – Olbia Arena