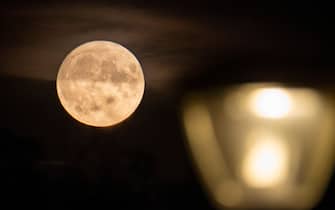 The Superluna dello Sturgeon follows those of May, June and July, called – respectively – “flowers”, “strawberries” and “deer”, all visible before the middle of the month (In photo Eindhoven – Holland)

The sky of August 2022, the astronomical events not to be missed

The Sturgeon Moon is so called because, according to the Native Americans, this is the time of year when there was a great presence of these fish in the Great Lakes (In photo Dunstanburgh Castle – United Kingdom)

Otherwise, this Moon is also called “of the wheat” because it falls in the month of the cereal harvest (In photo New York City – USA)

Lunar eclipse, images from the world of the Red Superluna. PHOTO

The Sturgeon Full Moon was at its maximum at 2:36 am (Italian time) on Friday 12 August (In photo Alameda – California)

The previous night, that of 11 August, there was the so-called “kiss” between Saturn and the Moon, an even more suggestive phenomenon in the Perseid season, that is, the shooting stars (In photo Liverpool – United Kingdom)

When there is a Supermoon, the satellite visually appears seven percent larger and fifteen percent brighter than a normal full moon (In photo Alameda – California)

The moments of greatest visibility for the Moon are at sunset and sunrise, that is when it rises and when it falls (In photo Tour Eiffel – Paris)

This phenomenology sometimes makes it more difficult to sight shooting stars whose greatest concentration occurs in the first half of the month, with the peak between 11 and 13 August (In photo Alameda – California)

That of August is a full Moon in Aquarius, an air sign that invites you to take into account your emotions in which this is the right time to clarify (In photo Tour Eiffel – Paris)