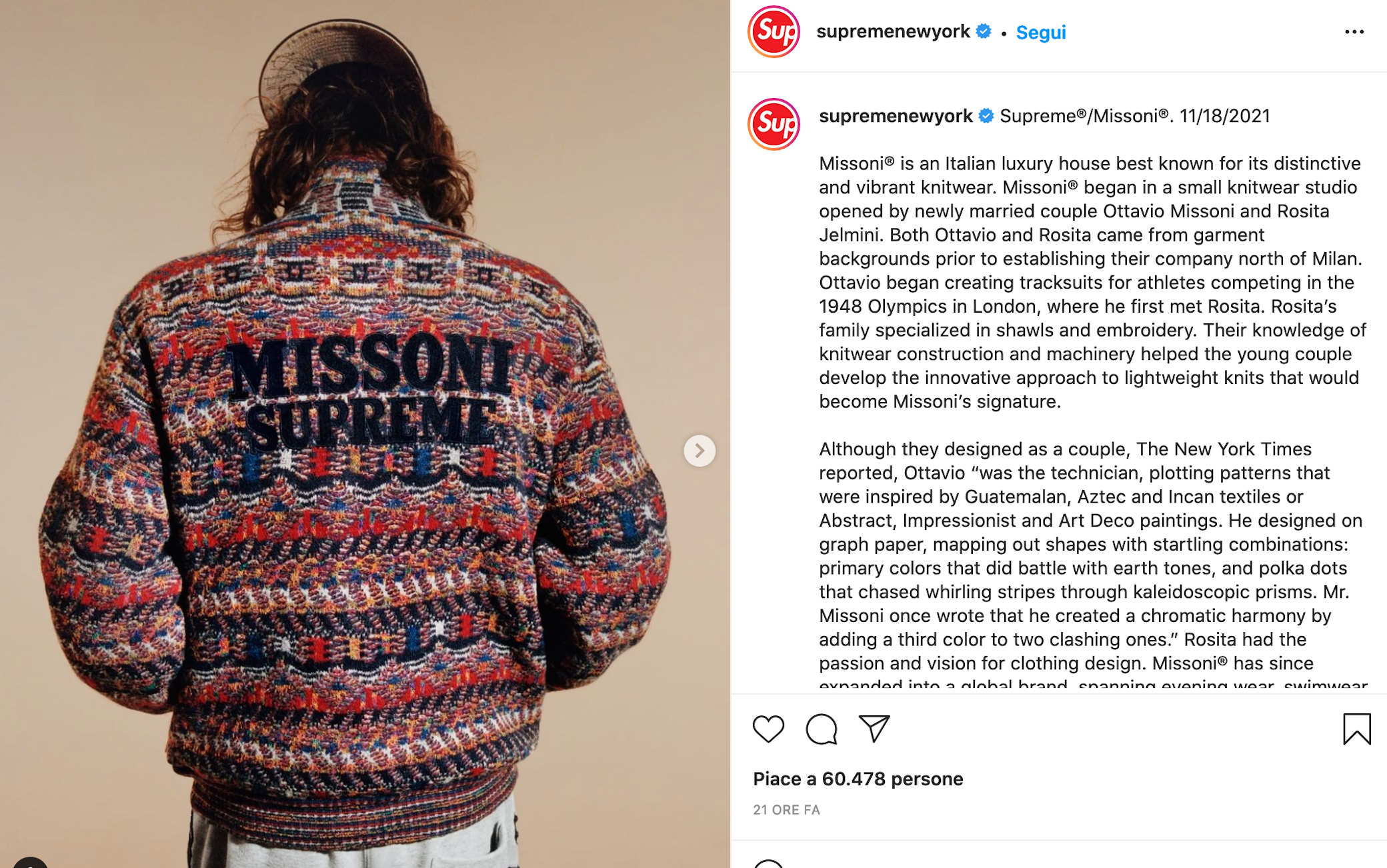 Supreme and Missoni have announced a collaboration as unprecedented as it is unexpected: the New York brand and the historic Italian Maison have worked together to launch a capsule for the Fall 2021 collection.

A special line that will include jackets, sweaters, polo shirts, hoodies and hats, available starting November 18, 2021 worldwide (in Japan, however, it will be released on November 20).

The title of the co-lab is unequivocal: it’s called Supreme / Missoni and wants to renew the history of our local brand founded in 1953 by Ottavio Missoni and Rosita Jelmini.

In the year of the centenary of the founder’s birth (Ottavio was born on 11 February 1921 in Ragusa di Dalmazia and died on 9 May 2013 in Sumirago), this collaboration really sounds like something epochal.

As for the brand founded in New York in 1994 by James Jebbia – one of the leaders of streetwear – this is yet another foray into the luxury market. The announcement of the collaboration with Missoni comes just a week after the news of Supreme’s partnership with Tiffany & Co., the famous jewelry brand.

Supreme worked with Missoni on a new Fall 2021 collection consisting of a jacket, a sweater, a polo shirt, a hoodie and a Crusher, as the New York brand itself reveals on its social channels.
And in presenting this partnership, he wanted to make an introductory hat related to Missoni.

“Missoni is an Italian luxury house known for its distinctive and vibrant knitwear. Missoni was born in a small knitwear workshop opened by the then newlyweds Ottavio Missoni and Rosita Jelmini. Both Ottavio and Rosita came from fashion backgrounds before opening their company, located north of Milan. Ottavio began creating suits for athletes competing in the 1948 London Olympics, where he first met Rosita. Rosita’s family specialized in shawls and embroidery. That legacy of building and using knitting machinery helped the young couple develop the innovative approach to lightweight knitwear that would become Missoni’s signature. Although they drew in pairs, according to the New York Times, Ottavio ‘was the technician, tracing patterns inspired by Guatemalan, Aztec and Inca fabrics or abstract, Impressionist and Art Deco paintings. He drew on graph paper, mapping shapes with surprising combinations: primary colors combined with earth tones and polka dots that chase swirling stripes through kaleidoscopic prisms. Mr. Missoni once wrote that he created a chromatic harmony by adding a third color to two contrasting ones’. Rosita had the passion and vision for clothing design. Since then Missoni has expanded to become a global brand that includes evening dresses, swimwear, fragrances and furniture “, these are the words used by Supreme in the caption accompanying the carousel of photos showing Supreme / Missoni garments ( which you can see at the bottom of the article).

The collaboration was announced by Instagram, even before the arrival of the official press release issued by the press offices of the two brands involved.

Supreme’s account on IG previewed the pieces of the collaboration with Missoni, of which you can watch the carousel of shots at the bottom of this article.

Although it is not new for Missoni to collaborate with various brands (as happened recently with Palm Angels, Moleskine or Izmee), this will be the first time in the streetwear field. If for the Maison founded by Ottavio it is a debut in an unprecedented field, on the other hand Supreme is now Supreme in name and in fact in streetwear.

The New York brand, purchased last year by Vf corp, has in fact signed successful alliances, such as those with Nike, The North Face, Vans, Champion, Lacoste, Levi’s and Stone Island.

This foray into the world of luxury fashion follows collaborations with three other sacred monsters of haute couture: Louis Vuitton, Emilio Pucci and Rimowa, all belonging to the luxury giant LVMH.

Lots of news from Supreme

In addition to the collaboration with Missoni – which will be available in stores in a few days – and the one announced with Tiffany & Co., this is a period of great excitement at Supreme.

The brand has recently inaugurated its first store in Germany, in Berlin, continuing its expansion in Europe.
The boutique has opened at number 43 Torstraße in the German capital and this is the fourteenth opening of a Supreme flagship in the world, while we are only talking about the fourth for Europe.

The first was inaugurated ten years ago in London in Peter Street, followed by that of Paris in 2016 and that of Milan, opened in May 2021.