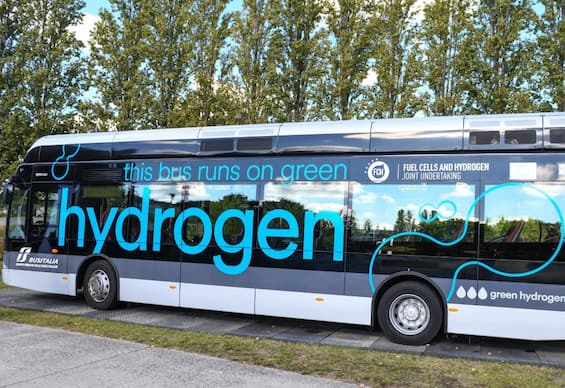 They travel to Holland with Qbuzz, a subsidiary of Busitalia. They travel about 2 million km every year, saving 1,760 tons of carbon dioxide in the atmosphere

The FS Group, led by Luigi Ferraris, exhibited the zero-emission bus powered by hydrogen at Innotrans, the International Trade Fair for Transport Technologies held in Berlin. There are 32 vehicles of this type used daily in the Dutch provinces of Groningen and Drenthe by the Qbuzz company, third in the country in TPL services, acquired in 2017 by Busitalia, a company in the Passenger Hub of the FS Group. The numbers of these vehicles show high efficiency performance combined with a low environmental impact: just think that the buses travel about 2 million km every year for a saving in the atmosphere of 1760 tons of carbon dioxide, compared to the use of Euro6 diesel vehicles. .

Collaboration with the Ministry of Infrastructure

“Having a company like Qbuzz, leader in the Netherlands, in the FS Group’s Passenger Pole will allow us to share all the skills necessary to implement the use of hydrogen in Italy – said the CEO of the FS Group Luigi Ferraris who, with the President of the FS Group Nicoletta Giadrossi he met at Innotrans the CEO of Busitalia Stefano Bonora and the CEO of Qbuzz Gerrit Spijksma. “These buses travel every day on TPL services in the north of Holland and are completely zero-emission vehicles,” continued Ferraris. “For it to be truly clean energy, however, hydrogen must be green, ie produced with processes that do not emit CO2 or other pollutants, as is the case with Qbuzz buses. It is evident that also in Italy it is very important to grow and develop clean energies, so as to be able to derive hydrogen from them. FS is also deepening its application in the railway sector, collaborating with the Ministry of Sustainable Infrastructures and Mobility, the National Agency for Railway Safety, other local railway operators and the Italian Regions interested in exploiting the opportunities offered by the PNRR in the hydrogen transport sector “.

Qbuzz’s hydrogen bus is based on a technology that allows the vehicle to store electricity converted from hydrogen in a fuel cell, which is used directly to drive the electric motor. In addition, the bus recovers energy during braking. A feature that makes Qbuzz vehicles fully sustainable is the “green” case of the hydrogen used which is a by-product (waste) of the chlorine production process. Qbuzz hydrogen buses are fully part of the strategy of Busitalia and the FS Group , towards sustainable mobility. In fact, through Qbuzz, the FS road passenger transport company has acquired consolidated know-how in the implementation and management of electric and hydrogen bus fleets and, in Italy, plans substantial investments in alternative and more traction technologies. sustainable with the gradual introduction, also in our country, of hybrid, electric and therefore hydrogen buses. Furthermore, the FS Group is investigating the application of hydrogen also to the railway sector. In fact, since 2018, through RFI, it has developed a first technical-economic feasibility project for application to the Terni-L’Aquila-Sulmona line and is collaborating with the Italian Regions interested in projects in line with the recent MIMS decree which, as part of the NRP, it has foreseen investments to carry out hydrogen experimentation in the railway sector.