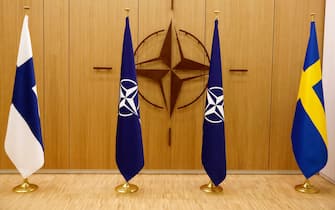 WATCH THE VIDEO: Putin: answer whether soldiers or NATO bases in Sweden and Finland

In early June, remember Business Insider, the Swedish and Finnish air forces took part in exercises along with the UK, France, Germany, Belgium and Norway along the Norwegian west coast

About 45 aircraft participated in the exercise, then from June 5 to June 17, the Finnish and Swedish forces joined the armed forces of 14 NATO members, including the US, for other operations in the Baltic with tens of vehicles and thousands of soldiers

Finland and Sweden have considerable military capabilities, and their support will strengthen the Atlantic Alliance. Helsinkifor example, Business Insider explains, has a fleet of 55 McDonnell Douglas F / A-18C Hornet, which he acquired in the 1990s. It is a single-seater capable of quickly passing from the fighter to the attack configuration (in the photo a model of this aircraft supplied to Switzerland)

The Finnish Ministry of Defense has stated that its Hornets will be decommissioned by 2030, giving way to 64 F-35As (in the photo a US model) that Helsinki ordered in December in the largest military contract ever registered in the country. Delivery of its first F-35 is scheduled for 2026

The fifth generation F-35A it is increasingly popular with US allies. The stealth jet can act as a fighter or strike platform and use its intelligence, surveillance and reconnaissance capabilities to enhance the effectiveness of friendly air and ground forces

There Sweden instead it has as a fighter jet the Saab JAS 39 Gripen, a less advanced but highly effective aircraft. Thanks to its small size it is very versatile and can take off and land on difficult landing strips. It also carries extremely effective air-to-air weapons such as Meteor and AMRAAM missiles

The Swedish jet is also one of the few fighters in service capable of carrying out the supercruise, maintaining supersonic speeds without draining fuel into the afterburner. This increases an aircraft’s drag at supersonic speeds while reducing fuel consumption, allowing it to fly faster and carry less fuel

The Swedish aviation manages 71 Gripen C and ordered 70 Gripen Esan upgrade over the Model C, to be delivered by 2027. Although both the F / A-18C and Gripen are used by other NATO members, tactical integration is achieved through frequent joint exercisessuch as those conducted in June