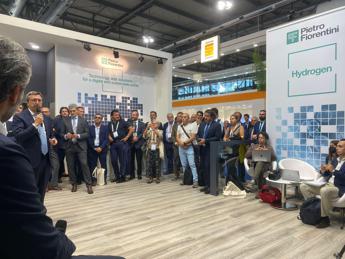 From water to hydrogen and from this to biomethane: it is the ‘power to gas’ SynBioS (Syngas Biological Storage) plant that the Hera Group will build in Bologna by 2023 by integrating it with its largest purifier.


But how does a plant of this type work? And why did Hera decide to place it in a purifier? In the first phase, the plant produces green hydrogen by electrolysis. In particular, the electrolyser, using renewable energy, dissociates the purified waste water producing hydrogen and oxygen. The latter is sent back to the purification tanks, while, in the second phase, the hydrogen thus obtained becomes biomethane.

A wastewater purifier serving major urban centers is equipped with an anaerobic digestion plant which, fed with wastewater sludge, produces a mixture of methane and carbon dioxide (called biogas). This mixture is introduced inside a biological reactor, which contains bacteria capable of producing additional methane by combining carbon dioxide with the hydrogen obtained during the first phase. In this way, while the carbon dioxide is made to disappear, pure biomethane is obtained which can be inserted and used, for example, in normal gas networks. The whole process is completed very quickly, so that biomethane is produced just a few seconds after the plant is electrically powered.

The advantages of the plant – In the future, oxygen, separated from hydrogen during the first phase, could allow the purifier to increase its ability to break down the pollutants contained in the water. To purify water, in fact, oxygen is needed, and this technology is able to supply it in a sustainable way. The plant does not consume precious water, but is fed with that already used by citizens and transported to the purifier through the sewers. Excess renewable electricity (i.e. not immediately absorbed by the grid) is exploited without dispersion, fueling the production of hydrogen.

The city gas distribution network is used to convey a green gas produced using carbon dioxide (which would otherwise be dispersed into the atmosphere) and which can therefore be used directly without requiring any kind of adaptation to city distribution networks and user equipment. both domestic and industrial.