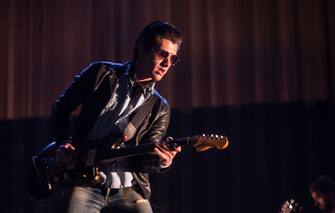 Divided into 6 days, the Festival features artists from all over the world. On Monday 15th August the original High Green Arctic Monkeys musical group will appear on the Festival stage

The British Dua Lipa, who will sing on Wednesday 10 August, will return to the Hungarian island of Óbuda

Sunday 14 August will be the turn of Tame Impala, with the latest single released “The boat I row”

Stromae is among the artists who will take the stage, bringing with him the latest single released “L’enfer”

Bastille has also been added to the line up, with their alternative rock and synth pop

Just 27 years old and already indie rock star, Samuel Thomas Fender, aka Sam Fender, will bring with him the two released albums and the most popular singles

Linked to her track and platinum record “Alarm”, Anne-Marie will take to the Festival stage with her R&B rhythm

In the constantly updated line up of the Festival, there is also the American DJ and producer of Japanese origins Steve Aoki

He conquered the charts with his Faded in 2015, the Anglo-Norwegian DJ Alan Walker was added among the artists present at the Sziget

Electronic music will also find space next August in Hungary with Daniel Victor Snaith, aka Caribou

No music is excluded from the Festival: trap lovers will take to the stage the Spanish Bad Gyal

Bit, synth and rock, but also neo soul thanks to the participation of the duo Jungle, British musicians Tom McFarland and Josh Lloyd-Watson

Among the artists who will participate in the event there is also Yoann Lemoine, known by the stage name of Woodkid, French musician and director

Among those present at the Festival there will also be the producer and DJ of Russian origin Nina Kraviz. Alongside musical performances, the Sziget includes cabaret, theater performances, screenings and workshops