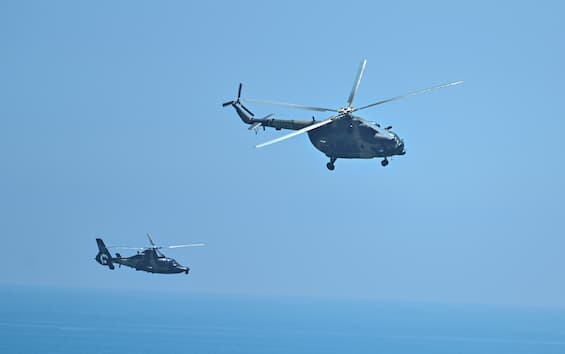 Still tensions between Beijing and Taipei. Chinese planes and warships crossed the ‘midline’ of the Taiwan Strait on the second day of full-scale military exercises in response to the August 2 visit to Taipei by US House Speaker Nancy Pelosi. In a note, the island’s defense ministry described the latest moves as “highly provocative”.

The Taiwanese president has deemed China’s launching of missiles near the busy international air and sea routes around the island “irresponsible”. And you, in a 4-minute message posted late yesterday evening on the Presidential Office website, you called on Beijing to act with greater self-control. Taiwan will not fuel tensions, but will defend sovereignty: “We strive to maintain the status quo across the Strait with an open mind for constructive dialogue,” Tsai said.

In the meantime, however, the crisis arouses fear at the international level. Singapore Airlines has canceled flights to and from Taiwan due to “increasing airspace restrictions” due to dangerous Chinese military exercises. “The safety of our staff and passengers is our top priority,” said the airline spokesperson.

Pelosi: “US will not allow Taiwan isolation”

And Washington returns to intervene on the issue. The US “will not allow” China to isolate Taiwan, says House Speaker Nancy Pelosi, in Tokyo for the last leg of her tour in Asia. And she added: “The core of the visit lies in the Taiwan Relations Act, and in all the legislative provisions and international agreements that shape our relations, in ensuring that there is peace in the Taiwan Strait and that the status quo dominates.” Meanwhile, the US aircraft carrier USS Ronald Reagan will remain in the vicinity of Taiwan to “monitor the situation”, as White House spokesman John Kirby said at a press conference.