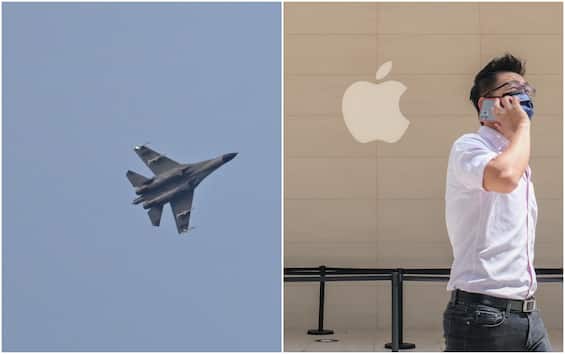 The tension between China and Taiwan has not subsided after the visit to Taipei of the speaker of the United States House, Nancy Pelosi. The Eastern Theater Command of the People’s Liberation Army (PLA) announced that military maneuvers continue today in the sea and airspace around the island, “focusing on the organization of joint anti-submarine and maritime assault operations. “. Taipei’s condemnation harsh: “The Foreign Ministry firmly condemns China’s decision to extend military exercises: China’s provocation and aggression have damaged the status quo of the Taiwan Strait and raised tensions in the region”. And according to the Nikkei website, Apple – to avoid delays related to the strict tax on Chinese customs inspections – would have asked its Taiwanese suppliers to label products from the island as “Made in China”, respecting a rule that Beijing tries to impose. time ago.

Apple’s decision is tied to the fact that, after Pelosi’s visit, the phrase “Made in Taiwan” can lead to delays, fines and even the rejection of an entire shipment, while the island demands that exports be tagged with the name “Taiwan” or “Republic of China”. GreatFire, an organization that works against Chinese online censorship, stressed that the Cupertino giant is not new to such decisions: long ago it had in fact removed the Taiwan flag from emoji keyboards for users in China and Hong Kong.

China “conducts normal military exercises” around Taiwan, which is “Chinese territory”, and has the right to operate in the waters “surrounding its territory,” Foreign Ministry spokesman Wang Wenbin said about the maneuvers announced by the Command. of the eastern theater of the Pla. “They are open, transparent and professional. The relevant departments have also issued a timely announcement, in line with domestic law, international law and practice: they are not only a warning for provocateurs, but also a legitimate move to protect sovereignty. national and territorial integrity “.

The Taiwanese Defense Ministry has assured that its armed forces will continue to monitor the situation around the Taiwan Strait closely and respond with patrols between aircraft, military ships and missile systems. The ministry, in a briefing, spoke of the need to train troops more regularly, as well as to start a fight against psychological warfare. According to the National Army, the Chinese Communist Party (CCP) launched an information offensive even before the military exercises: 272 controversial messages and fake news were detected from 1 to 8 August.

Beijing: “The United States is deliberately creating the crisis”

Meanwhile, the spokesman for the Chinese Defense Ministry Wu Qian said in a statement that the tension in the Taiwan Strait “was caused by the United States” which “must take full responsibility and the serious consequences for all this”. The spokesman added that Beijing’s countermeasures, “including the cancellation of military dialogue at the level of theater commanders, are justified and correct”, regarding reports by the American media that the US military leaders have repeatedly called the Chinese counterparts in recent days without receiving a response. “The United States is deliberately creating the crisis and at the same time looking for an excuse to blame others, which China strongly opposes,” Wu noted. The Chinese side expressed its position “on relations between the two countries and the two armed forces”, in particular on the visit of the speaker of the US House Nancy Pelosi, “but the US side said one thing and did another. , conniving and supporting Pelosi’s visit, and deliberately creating tensions across the Taiwan Strait. ” In response, China took eight countermeasures, including the cancellation of communication between the leaders of the Chinese and American military theaters, the working meeting of the Chinese and American Departments of Defense, and the Maritime Military Security Consultation Mechanism. “China’s relevant countermeasures are a necessary warning to the provocation of the United States and Taiwan, and the self-defense of national sovereignty and security is entirely reasonable and appropriate,” the spokesman continued. The bottom line “cannot be broken and communication requires sincerity. We urge the US side to seriously respect China’s fundamental interests and main concerns, to abandon the illusion of ‘using Taiwan to control China’ and not always go further down the wrong road, “Wu concluded.