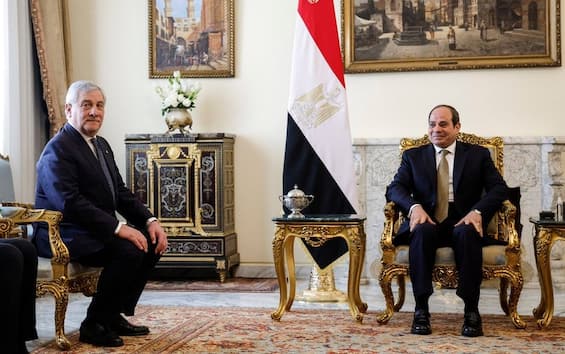 Foreign Minister Antonio Tajani met Egyptian President Abdel Fattah Al-Sisi in the Al-Ettehadeya presidential palace in Cairo. “Energy security, economic cooperation and stability in the Mediterranean, especially in Libya, also to counter irregular immigration. I asked and received reassurances for strong collaboration on the Regeni and Zaki cases”, the owner of the Farnesina reported in a tweet. “Egypt – writes the official Egyptian news agency Mena quoting the presidential spokesman Bassam Rady – aspires to develop relations with Italy and to work with it within the framework of the strong partnership between the two countries in order to develop bilateral relations in favor of a fruitful cooperation in all fields”.

Appointments on the agenda

Antonio Tajani’s agenda in Egypt in the afternoon also includes participation in a ceremony for the signing of a memorandum of understanding between the Egyptian Ministry of Health, GKSD Investment Holding and the San Donato Group, the leading Italian private operator of healthcare. This is what emerges from a program of the ceremony for the signing of the “Memorandum of Understanding” which aims to “improve investments in the health sector”. A brief speech is expected by Deputy Prime Minister Tajani, who since yesterday has been making the first bilateral visit to Egypt by an Italian Foreign Minister in the last five years in Cairo (the last was, in August 2018, the one carried out by the then head of the Farnesina, Enzo Moavero Milanesi).