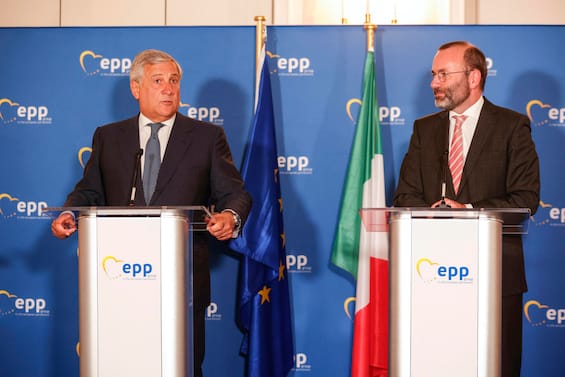 The blue executive tries to extinguish the controversy that arose after the publication of Berlusconi’s audio: “I am here to reaffirm the proud Atlanticist position of myself, Forza Italia and its leader”. And in an interview a Republic hypothesizes a revenge behind the spread of the Knight’s words. Metsola: “No doubts about Tajani, it’s a guarantee”

Troubled waters in Forza Italia after the publication of Silvio Berlusconi’s audio in which the former premier expresses his position on Vladimir Putin and the war in Ukraine. After the Cavaliere’s intervention to clarify his thoughts on the content of the conversations spread by LaPresse, Antonio Tajani also wanted to clarify the position of the party. He did so by arriving at the EPP summit that precedes the European Council scheduled for the day in Brussels. “I am here”, said Tajani, “to confirm once again the position of my party, my personal position and the position of the leader of my party totally in favor of NATO and transatlantic relations, in favor of Europe and against. the unacceptable Russian invasion of Ukraine “.

“I think someone wanted to take revenge”

Referring to the audio of Berlusconi, the former president of the European Parliament had already provided his version of the facts in an interview with Republic. “In that room there were at least a hundred people. It could have been anyone. I have the impression that someone wanted to take revenge. Maybe because he was not elected. Then anyone who knows Berlusconi knows that he has always spoken like this. It is known that certain he says things to her because he is convinced that if he had been personally involved with Merkel he would have been able to stop the war “.

“Always voted in favor of NATO and Europe”

“For Forza Italia”, declared the vice-president of the EPP, “what counts is the facts, the votes. And we have always voted in favor of NATO and Europe. Silvio Berlusconi, even as a European parliamentarian, has always voted in defense of the Ukraine. Even very hard documents. There can be no doubt about our position “. In Brussels, added the blue executive, “I am going there on behalf of Berlusconi, with whom I spoke last night, precisely to explain these things. He is very sorry for this incident. If there had not been the consultations, he would have come here himself. Brussels”. As for the “revenge”, Tajani excludes that it was a choice of the Knight: “Those phrases, made public, damaged him in the first place”. And he does not even believe that it was Licia Ronzulli’s work to hit Meloni and Tajani himself: “It seems difficult. And why? I don’t believe it.”

Metsola and Weber: “No doubts about Tajani, it’s a guarantee”

The leader of the group and president of the EPP Manfred Weber expressed his support for Tajani in the moments preceding the start of the summit. “We will support any government that has a clear pro-EU, pro-Ukraine and pro-rule of law approach. I’m happy Antonio Tajani is here, he’s the guarantor of Fi’s Atlanticism,” he said. . While the president of the European parliament Roberta Metsola commented: “I will meet Tajani, I have spoken with all the Italian political leaders and my message to Italy is to stay in the heart of Europe, I have no doubts that it does and about its Atlanticism” as well as “on his support for Ukraine”.