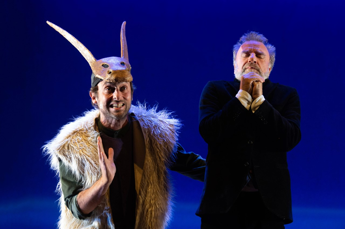 With music composed by Paolo Fresu, on trumpet and flugelhorn, directed by Giorgio Gallione

A ‘Tango Macondo’ suspended between the Sardinia of the writer Salvatore Niffoi and the city invented by Gabriel Garcìa Màrquez, to represent the story of Matoforu, a Sardinian ‘seller of metaphors’ and his love for Anzelina, his singer, for a journey – underlined and accompanied by music composed by Paolo Fresu, who performs on trumpet and flugelhorn – in a territory defined as “on the border between delirium and geography”, which starts from Mamoiada in the deep Barbagia and reaches South America in Macondo, the imaginary country born from the imagination of author of ‘One Hundred Years of Solitude’. All this, on stage from 7 to 12 December at Quirino theater in Rome with Ugo Dighero, Rosanna Naddeo, Paolo Li Volsi.

The creator of the show explains, based on the novel ‘The seller of metaphors’ by Niffoi, as well as director Giorgio Gallione: “In a narrative that wants to be fluvial, magical realism and tragedy coexist; a fantastic tale that binds two neighboring lands that become the laboratory and melting pot of an entire humanity. With Fresu’s music to guide the story, giving it back all the evocative richness and making it ferment passions and madness, x-rayed in all their overwhelming humanity and richness ” storytelling and music, tangos and popular music, archaic rites and dream images, ‘Tango Macondo’ seeks the enchanted flavor of a time in which stories also served to alleviate the fatigue of living and to reiterate the almost physiological need of the human being to listen and tell.