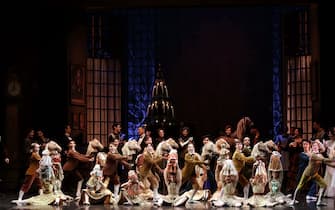 The new ballet season of the Teatro alla Scala in Milan opens in the footsteps of Rudolf Nureyev, the legendary dancer whose thirtieth anniversary of his death will be celebrated on January 6th. After 16 years, his version of the Nutcracker returns to shine on stage

The Nutcracker is back on stage in the staging by Nicholas Georgiadis, with its décor and costumes renewed by La Scala in 1987 (lighting by Andrea Giretti). On the podium conducting the Teatro alla Scala Orchestra Valery Ovsyankikov

Sixteen years after the previous performances, which took place in 2006, The Nutcracker is a showcase for the company’s artists who worked under the supervision of the director of the corps de ballet Manuel Legris and Aleth Francillon, who danced it with him at the Paris Opéra . It was for them that Nureyev added the pas de deux in 1985

Five casts alternate in the main roles. Also on stage are the students of the Ballet School of the Accademia del Teatro alla Scala directed by Frédéric Olivieri

The first performances, including the Under 30 preview, are entrusted to the principal dancers Nicoletta Manni and Timofej Andrijashenko

Martina Arduino and Jacopo Tissi will greet 2022 in the end-of-year performance, on December 31st (6pm), then again on stage on January 4th and 7th

“The Nutcracker is a fairy tale where you can breathe the magic of Christmas and it’s the thing that helps us face such a difficult show, just to make history” explains Nicoletta Manni to Sky Tg24 immediately after the Under 30 preview

Nicoletta Manni and Timofeij Andrijashenko, a couple on stage and in life. PHOTO

The marriage proposal on the stage of the Arena di Verona

Among snowflake waltzes, toy soldiers, mice and cheering children waiting for the gifts, Nureyev has built a real jewel that manages to make the corps de ballet shine, directed by Manuel Legris who was nominated étoile by Nureyev in 1986

“We have 5 casts and they are almost all new in these roles. We really have a challenge with a beautiful production. In short, we have all the things to have a very nice Christmas and end of the year” underlines director Manuel Legris

Nureyev gave a psychological dramaturgical setting to the Nutcracker. Clara’s dream becomes a teenager’s journey between lights and shadows

On the occasion of the return to the scene of Rudolf Nureyev’s version in the Ridotto Palchi Arturo Toscanini, the bodice worn by Nureyev in the performances of the Nutcracker at La Scala and the costume of Carla Fracci in the role of Clara are on display, both made from sketches by Nicholas Georgiadis

Rudolph Nureyev brought The Nutcracker to Milan for the first time in 1969 in the triple role of choreographer and dancer as both the Prince and Clara’s godfather, Mr. Drosselmeyer

A moment of Russian dance with Gabriele Corrado and Beatrice Carbone

The music and choreography converge towards the famous waltzes and in the pas de deux, rich in technique, rigor, lines and balances, and reveal the dramaturgical setting that Nureyev wanted to give to this ballet: Clara’s dream, the journey of a teenager between shadows and lights

Academism but also verve, technique and theatrical expressiveness that are well suited to the style of the Scaliger Ballet, with which Nureyev had a special bond, so much so that he assigned most of the reinterpretations of the classics to La Scala and was himself many times on stage at the Piermarini to play Drosselmeyer, who transforms into a shining Prince