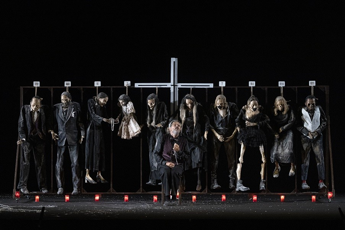 And the November 2is the recurrence dedicated to the dead, but the gloomy atmosphere not to say macabre of the circumstance often lets the light of joy, of happy memory, of the surreal dance that accompany ‘Sugar baby: feast of the dead’the work written and directed by Emma Danteloosely inspired by ‘Lo cunto de li cunti’ by Giambattista Basilewhich inaugurates the new season of Argentina theater in Rome. As is now a consolidated tradition, the Palermo director proposes a choral work – in this case in the Neapolitan dialect – with the presence on stage of a dozen actors, including Carmine Maringola in the role of the old protagonist who recalls ‘his’ dead; Stephanie Taillandier for mommy; Nancy Rabona, Maria Sgro, Federica Greco for the three sisters.


The work – produced by Sud Costa Occidentale in co-production with various entities including National Theater of Naplesthe Biondo from Palermothe Theater National in Marseille and the Avignon Festival – will remain on stage at the Teatro di Roma until 30 October, afterwards, the second inspiration for Emma Dante from Basile ‘The scortetaca’ five years ago. At the center of the surreal story is the re-enactment of the deceased loved ones by an old man, now wrapped in his solitude, in the night preceding the holiday on November 2, while preparing the traditional southern dessert of the occasion, or the sugar puppet evoked. in the title, a mixture of water, flour and sugar for an anthropomorphic statuette to be swallowed up even with a certain voluptuousness.

The author and director explains Emma Dante: “The tradition of various places in the South saw the custom of organizing banquets full of sweets and biscuits, in exchange for the gifts that on November 2 the relatives of the deceased brought to the children from the ‘kingdom of the dead’, to remember the loved ones who have disappeared. During the night ritual, dinner was a moment of symbolic ‘patrophagy’, in the sense that the original value of anthropomorphic sweets was precisely that of depicting the souls of the dead, in some way to ‘eat them’, between the memory of the dead and the feast of the life”.