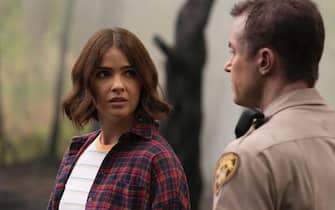 On January 26, 2023 in the US and Canada and January 27 in the UK, Latin America and Australia will be released Teen Wolf: The Moviethe film based on the series Teen Wolf. International distribution dates on Paramount+ will also be announced soon (Pictured Shelley Hennig aka Malia Tate)

The film was written and produced by Jeff Davis, creator of the original show. In the picture Holland Roden (Lydia Martin)

The protagonists of the MTV series aired from 2011 to 2017 will then return. Scott McCall (Tyler Posey) will return home to fight a new and undefined evil

“Beacon Hills regularly messed with him and everyone else who lived in it – except Peter Hale, he thrives in Beacon Hills. But Scott wants to make a change. He now he lives in Los Angeles…he has been trying to step away from the leadership role,” Posey told Entertainment Weekly, which first published the exclusive photos

Teen Wolf, revealed the cast of the film sequel to the TV series

The menace of the film is Nogitsune, who also brought along Allison (Crystal Reed)

Teen Wolf, the first images from the set of the film

Allison’s return is certainly a surprise, given that the character was killed off in season 3 of Teen Wolf just as he was fighting the villain. “We don’t know if she’s alive,” however, Crystal Reed specified, ambiguous

The best movies in streaming and in cinemas of November 2022

Derek will also be accompanied by his son Eli, played by new entry Vince Mattis

Loosely based on the 1985 film of the same name and developed for television by Jeff Davis, the original series ran for six seasons. The protagonist was (and is) Scott McCall, the teenage werewolf who defends the city of Beacon Hills from supernatural enemies