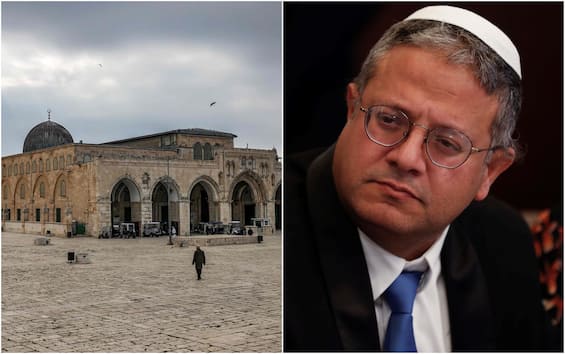 Concern is growing about the possible increase in Israeli-Palestinian tensions in the Middle East, after a thirteen-minute walk by Minister Itamar Ben Gvir on the Esplanade of the Mosques (the Temple Mount for Jews) in Jerusalem. The visit provoked Palestinian anger and protests, an avalanche of criticism of Israel, and a tidal wave of domestic and international backlash.

Itamar Ben Gvir, contested exponent of the radical right of ‘Otzma Yehudit’ (Jewish Power), is the head of national security in the new government of Benyamin Netanyahu, in office for only a few days. On the morning of January 3, escorted by dozens of agents and an Orthodox rabbi (controlled from above by a drone), he showed up on the Esplanade and explained that he had gone up there on the occasion of a Jewish religious celebration. “The Temple Mount is the most important place for the people of Israel. We guarantee freedom of movement for Muslims and Christians, but Jews will also go up to the Temple Mount. And for those who express threats there will be an iron fist”, he said. A message in line with a character who, despite some recent conciliatory statements, has repeatedly declared that he refers to the theories of the extremist and racist rabbi Meir Kahane, outlawed from Israel.

Netanyahu engaged “in defense of the status quo”

After the controversy, Netanyahu’s office intervened: it reiterated that the premier is committed “to the meticulous defense and without any change of the status quo on the Temple Mount and will not surrender to the dictates of Hamas”. “In the context of the status quo – recalled a source in the office – in recent years other ministers have climbed the Temple Mount more than once and among them also the minister for internal security Gilad Erdan (Likud, ed). The statements on a change in the status quo are therefore unfounded”.

The wrath of the Palestinians

The explanations, however, were not enough to curb the angry reaction of the Palestinians, who had previously warned Ben Gvir and Netanyahu. “A serious challenge to the feelings of all the Palestinian people,” attacked Prime Minister Muhammad Shtayyeh. And he spoke of an “assault on the Al-Aqsa mosque”. “These incursions – he added – aim at transforming the mosque into a Jewish temple, which constitutes a violation of all international norms, values, agreements and laws and of Israel’s commitments towards the American president”.

The reference is to the set of rules that regulate the sacred place of the three religions. Jordan – which is the guarantor of that Status, even if not fully recognized by Israel – has summoned Ambassador Eitan Surkis to Amman, delivering him a letter of protest. “The assault on the Al-Aqsa mosque by a member of the Israeli government and the violation of its sanctity is a condemnable, provocative act, and constitutes a flagrant violation of international law as well as the historical and legal status quo in Jerusalem “, said Foreign Ministry spokesman Sinan Majali. Jordan was joined by the United Arab Emirates and Bahrain (signatories of the Abraham Accords with Israel), Saudi Arabia, Egypt, Qatar and Turkey. The Israeli media spoke of critical statements also from France and Great Britain. Germany has asked to avoid actions that could increase tensions.

White House: Any change in the status quo is unacceptable

Even the US ambassador to Israel Tom Nides spoke of “unacceptable actions” towards the status quo. “Any unilateral action that endangers the status quo is unacceptable,” the White House also said. “The United States is firmly in favor of maintaining the status quo with respect for the holy places in Jerusalem,” said the spokeswoman Karine Jean Pierre State Department spokesman Ned Price also said the United States was “deeply concerned” and warned that Itamar Ben Gvir’s move “has the potential to exacerbate tensions and provoke violence”.

Israeli opposition leader Yair Lapid also spoke. “This is what happens when a weak premier entrusts the most explosive site in the area to the most irresponsible man in the Middle East,” he said. Ben Gvir was also warned by Israel’s Sephardic Chief Rabbi Yitzhak Yoseph: “As as a minister representing the government you should act according to the instructions of the rabbinate who have long banned visiting the Temple Mount,” he reminded him.

Where is the Esplanade of the Mosques

The esplanade of the Mosques is located in the Old City of East Jerusalem, in the Palestinian sector occupied by Israel. It is the third holiest site in Islam and the holiest site in Judaism with the name of the Temple Mount. Thanks to a historical “status quo”, non-Muslims can only go there at specific times and cannot pray there. In recent years, however, a growing number of Jews – usually Orthodox and/or nationalists – have surreptitiously prayed there, a gesture denounced as provocative by the Palestinians and by the countries in the area that support them. Ben Gvir, contrary to what the Israeli rabbinate claims, believes that Jews should be able to pray in the holy place, where he had already gone when he was a deputy. The minister, known for his anti-Palestinian diatribes, had already announced his intention to go to the holy place and Hamas, which holds power in Gaza, had warned that such a visit risked being the prelude to an escalation. “The Israeli government to which I belong will not give in to a cowardly and murderous organization. If Hamas thinks of frightening me with threats, it must understand that times have changed,” Ben Gvir replied. Hamas spokesman Hazem Qassem called Ben Gvir’s move “criminal”, while Ramallah’s foreign ministry described it as an “unprecedented provocation”.

In 2000, a visit by Ariel Sharon, who led the right-wing opposition, had caused clashes and victims, starting the second Intifada which then lasted until 2005. In May 2021, after there had been clashes on the esplanade and elsewhere in East Jerusalem, Hamas had fired rockets on Israel and there had been an 11-day war against the Israeli army.