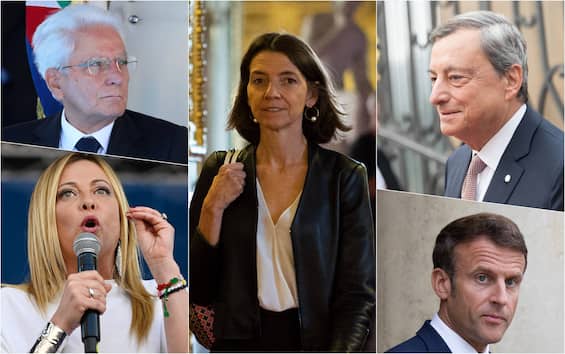 An interview with Laurence Boone, Minister of European Affairs in France, has opened a case between Rome and Paris. The head of the department allegedly said “we will monitor respect for rights and freedoms”, provoking the reaction first of Giorgia Meloni, probable next Prime Minister, then of Draghi and finally of President Mattarella. Finally, Emmanuel Macron thought about throwing water on the fire: the French president recalled that France will work “with good will” with the future Italian premier, and that “it is not the French president who chooses the Italian prime minister but the vote of the Italians and, according to your Constitution, the Italian president ”.

Boone: “We will monitor respect for rights and freedoms”

To kick off the tension between Rome and Paris is the Minister of European Affairs, Laurence Boone, who in an interview allegedly declared: “We want to work with Rome but we will monitor respect for rights and freedoms”. For her “it is important that the government Meloni remains on the European front against Moscow and in favor of sanctions. We will respect the democratic choice of the Italians. Europe must remain united, especially in addressing the war that Russia has declared in Ukraine, with the sanctions we have adopted. On this point, Meloni clearly expressed her support for what Europe is doing. After that it is clear that we have differences. We will be very careful to respect the values ​​and rules of the rule of law. The EU has already shown that it is vigilant towards other countries such as Hungary and Poland “.

Meloni: “No to interference, Paris denies”

The first to answer the French minister was Giorgia Meloni, who will most likely soon sit at Palazzo Chigi: “I read that the French minister Laurence Boone would have said: ‘We want to work with Rome but we will monitor respect for rights and freedoms’ and’ we will be very careful respect for the values ​​and rules of the rule of law. ‘I hope that the left-wing press has misrepresented the statements made by foreign government officials and I trust that the French government will deny these words, which resemble too much an unacceptable threat of interference against a sovereign state, member of the EU. The era of PD-led governments asking for protection abroad is over “.

Paris: “Simplified Boone phrases, we don’t want to give lessons”

And an answer actually came from Paris: “The presentation in this interview of the relationship we intend to have with Italy excessively simplifies the minister’s thought. As he said, France obviously respects the democratic choice of Italians. The minister, who he is close to Italy, he wants to carry on the cooperation work and wants to dialogue with the future executive as soon as possible “, said sources in the cabinet of the French minister for European affairs, Laurence Boone.” The minister does not intend to give lessons to anyone “, has been added.

Draghi: “Curiosity about the future government, not worry”

Meanwhile, from Prague, the words of the outgoing premier Mario Draghi have arrived: “When there is a change of government there is a lot of curiosity, but not worry. There is respect for the choice of Italians and curiosity to know what the evolution of the government will be, but in foreign policy Italy’s line should be unchanged “, said the Prime Minister, answering a question whether European partners are reservations were expressed about the future government. Words echoed by the statements of Giorgia Meloni: “The position of FdI was extremely clear when it was in the opposition. That’s our position, there is no reason for it to change. “

Mattarella: “Foreign supervision? Italy knows how to look after itself “

And the President of the Republic, Sergio Mattarella, also spoke on the subject: to a specific question on oversight by foreign governments, the head of state replied that “Italy knows how to look after itself in compliance with the Constitution and the values ​​of European Union “. Words reaffirmed also by Giorgia Meloni:” I think that any Italian can feel represented by the report about the fact that Italy, as correctly said, is perfectly capable of looking after itself without interference “.

Macron: “We will work with good will with the Italian premier”

Finally, after a day of tension, French President Emmanuel Macron spoke directly: “I want to express all my friendship and full confidence in President Mattarella and in the conclusions he will draw from the” elections in Italy. France will work “with good will “with the future Italian premier. Macron wanted to remind at the press conference the good fortune of” working every day with my friend Mario Draghi “.” There hasn’t been a day when I didn’t learn from him, and that we weren’t happy working together. I owe him a lot, and I think it was immense luck for Italy and Europe “to have him in office these years, he added.” Having said that, I have always had the same approach. We have the leaders that the people give us in our countries. Then it is our duty to move Europe forward, in a just and effective way, with pride in who we are and by remaining vigilant in respecting our principles, our objectives and our ambitions. With whoever Mattarella chooses to appoint to the government, France will work with good will and in a demanding way, as we are with ourselves, to advance the European project in which we believe. “And then he reiterated:” It is not the French president who to choose the Italian Prime Minister but the vote of the Italians and, according to your Constitution, the Italian President. I will work with the person who will be so designated with the best will. But I will not even change my principles and my values ​​”.