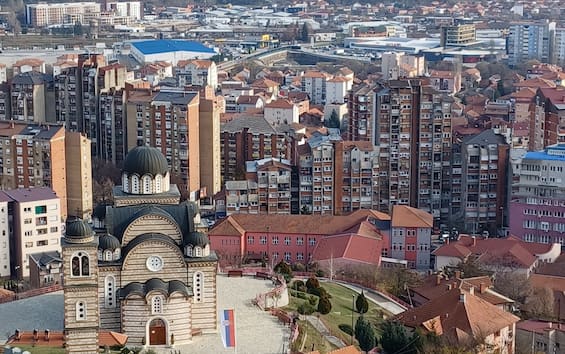 Mitrovica, the most important city in northern Kosovo, is divided in two by inter-ethnic tensions. In the southern part live the Kosovar Albanians, in the north the Kosovar Serbs. Separating them is not a wall but the Ibar River, a natural barrier that turns into a wall. The bridge that connects the two parts is crossed by only a few people and the two communities have lived substantially separate since the time of the 1999 war. They are two parallel worlds. Serbs are Orthodox Christians, for example, while Albanians are Muslims. On one side the Serbian dinar circulates while the euro circulates on the Albanian side, as in all of Kosovo.

In fact North Mitrovica, which is the Serbian part, although nominally in Kosovo, is closely linked to Belgrade. It’s like a state within another state. The party in power that always wins the elections is financed by Serbia, but above all the schools and hospitals are managed directly from Belgrade, and follow the Serbian education system. So the kids learn Serbian and don’t have the chance to communicate with their peers across the river, who study and speak Albanian.

Recently, tensions have focused on the issue of license plates. Indeed, Serbia never recognized Kosovo’s self-proclaimed independence in 2008 and, still considering it its own province, continued to issue motorists its own license plates for northern Kosovo. A situation that Pristina has tried to counter first by imposing a ban and then a fine. An attitude that has led to very strong protests by the Serbs, who have resigned en masse from all Kosovar institutions in the four municipalities in the north of the country, which have a Serb majority. The effect has been, for example, that there are virtually no police left in northern Kosovo.

The status of Kosovo

The tensions have led the two sides to negotiate a compromise in Brussels, thanks to which, however, the issue is only postponed for a year, not resolved. The central point continues to be the status of Kosovo which is a newborn state, which is not yet part of any international organization. It is recognized by only half of the UN countries, including Italy. It is a self-governed republic under a UN protectorate, with a NATO military mission, KFOR, which ensures its peace. But Serbia, as mentioned, does not recognize it, despite accepting its borders.

Northern Kosovo, and Mitrovica in particular, is a hybrid situation that has rarely been seen in the world. This area, roughly the size of the municipality of Rome, is rich in mineral resources and is home to Lake Ujman, which supplies most of the water needed to irrigate Kosovo’s fields. And it is inhabited by a large Serb majority who feel tied to Belgrade, so much so that almost everyone here has dual nationality. Pristina accuses Belgrade of fomenting tensions in the north of the country to continue to control it, through a network of criminal gangs. The Kosovar Serbs instead accuse the police of ill-treatment and denounce discrimination. In the Serbian part of the city, the citizens live in a riot of Serbian flags that seem to be the result of a well-defined propaganda, while in the south, the Albanians seem more relaxed, less under pressure than the citizens of the north, who struggle to speak with foreigners and especially with journalists.

In Mitrovica there are also many associations and NGOs working for reconciliation and for the construction of common land between the citizens of the two ethnic groups. But it’s not an easy job, and not just because of the linguistic misunderstandings between the two parties. Nothing is enough, like a rise in tension over the license plate issue, to ruin the work of years. Many accuse the political forces of not having a real interest in easing tensions, but rather of helping to fuel them. The Serbs point the finger at the government of Pristina, the Albanians against that of Belgrade. The fact is that this surreal situation, which is certainly toxic for the population of the city, has been rooted for decades and does not seem to be destined to resolve itself in the short term.