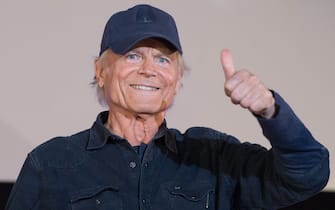 The fifth episode of the thirteenth season of Don Matteo marks the farewell of Terence Hill to the TV series. In place of him Raoul Bova, in the role of Don Massimo

Terence Hill’s career is really long. The actor, real name Mario Girotti, was born in Venice on March 29, 1939. He starts acting as a child, after being noticed by Dino Risi during a swimming competition

WATCH THE VIDEO: Terence Hill, 7 curiosities about the actor

From that moment on, he will never stop acting. As a teenager, he will need the small parts to pay for his studies, first the classical high school and then the faculty of literature and philosophy at the University of Rome.

After three years of university he decides to devote himself entirely to cinema. A decision made in 1963, when Luchino Visconti chooses him for a small part in the film The Leopard

Don Matteo, the photo of the last take for Terence Hill

In 1967 he acted in the blockbuster film God forgives, i do not! Where he meets Carlo Pedersoli, alias Bud Spencer

It was at that time that actors were encouraged to choose stage names that could also work internationally, especially in westerns. Girotti thus chose Terence Hill

Don Matteo 13, the cast of the new season

Terence Hill became famous above all for spaghetti-western titles along with Bud Spencer, such as They Call Me Trinity… and its sequel … they kept calling him Trinity. But also The two almost flat super feet And I’m with the hippos

They called it Trinity, the film with Bud Spencer and Terence Hill

Over the years the actor also acted alone as the protagonist. Among his most famous films My name is Nobody of 1973

Otherwise we get angry, the reboot of the film with Bud Spencer and Terence Hill

Terence Hill is also a director. In the 1980s, for example, he directed himself in the film Don Camillo

Since 2000 the actor has been the star of Don Matteo, in the role of a priest with great investigative intuition. The first episode of the tenth season holds the European audience record for a fiction that has reached its twelfth series