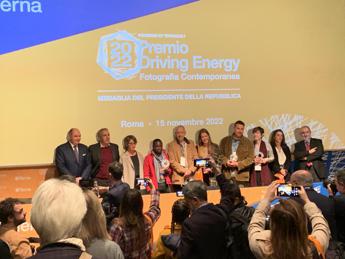 Triadthe operator of the national electricity grid, announced the winners of the first edition of the “Driving Energy Award 2022 – Contemporary Photography”, the free competition, open to all photographers in Italy, aimed at the promotion and cultural development of the country and of new talents in the sector. The best interpreters of the theme of the Award, ‘Cameras on Driving Energy’, were Paolo Ventura, who won the Senior Award (from 31 years old) with the work entitled ‘I Ginestra’, and Gaia Renis, who won the award Young people (up to 30 years old) for the photographic work ‘Stereocaulon vesuvianum’.


The two Special Mentions, attributed to the works inspired by the themes “Contemporary Normality” and “Circularity. Courses and appeals”, went respectively to Mohamed Keita, with the work entitled ‘Walking and walking…’, and to Eva Frapiccini, with ‘La porta di luce alias hommage to DM’. The third Special Mention, awarded on the basis of the vote of over a thousand people from Terna, who thus composed the largest popular jury of a photographic award, was assigned to Andrea Botto with the photographic work ‘Onda d’urto’.

The 5 winning works and the other 35 finalists are from today on display at the Palazzo delle Esposizioni in Rome, until 27 November, with free access. The Award exhibition is also the first project by Terna and Palazzo delle Esposizioni to land in the Metaverse, the virtual 3D space in which users can move, share content and interact using their own personalized avatars. An ad hoc version of the show in 3D, which will remain open to visitors at any time and from anywhere in the world. The Prize, which received the Medal of the President of the Republic, invited photographers to turn their sI look at the contemporary to give an artistic vision of Terna’s missionin its role as director and enabler of the energy transition.

“The large participation in the Driving Energy 2022 Award, transversal and inclusive, confirms Terna’s commitment in the world of culture through the values ​​that characterize its action for the benefit of the country. The more than 1,300 participants in the competition represent the best creative response to Terna’s invitation to participate in building an open, sustainable and courageous future, also thanks to the photographic works that we are happy to reward today”, he declared Valentina Bosetti, President of Terna. “With the first edition of the Driving Energy Award, we have managed to give visibility to works and artists of all ages and geographical origins, with a marked interpretative talent, and, at the same time, we are proud to have also launched a wide-ranging cultural project. Evocative images capable of conveying a vision of Terna’s mission which is, at the same time, visual research and a multiplier of value and knowledge on the subject of energy”, declared Stefano Donnarumma, Chief Executive Officer of Terna.

“Identifying the shortlist of 40 finalists was not easy because the Award received many nominations with works of average high artistic quality. More complex, then, was the subsequent choice, that of the five winners: we faced a stimulating critical challenge, confronting ourselves with works that can be defined, in a certain sense, as already all successful for their authority, expressive mastery, interpretative finesse and artistic courage . The final choice was guided, on the one hand, by the criterion of ‘primus inter pares’, on the other, by the need to bring to the attention of all works which, more than others, could be representative of the artistic community of the country”. declared Marco Delogu, Curator of the Prize and President of Palaexpo.

The reasons attribute the Senior recognition to Paolo Ventura (55 years old) “for having given the Prize aoriginal interpretation, subtle and, at the same time, full of implications and cross-references. With ‘I Ginestra’, Ventura underlines that the ‘driving’ and ‘transmission’ of energy are above all a human fact, as he himself declared in the explanation of his work”; the Junior prize to Gaia Renis (23 years old) “for having proposed a courageous, complex and essential work: centered on the paradox of ‘photographing the invisible’, investigates, explores and enhances the phenomenon of energy at a microscopic level, starting from its imperceptibility and coming to underline its visible essentiality for the ecosystem and its biodiversity”; there Special Mention ‘Contemporary Normality’ to Mohamed Keita (29 years old) “for having proposed, with a valuable composition, for aesthetic impact and conceptual density, a reflection that also restores two fundamental characteristics of theenergy, as the central element of contemporary normality: source of survival for man, element of transformation of the urban landscape”; there Special Mention ‘Circularity. Courses and appeals to Eva Frapiccini (44 years old) “for having chosen to stage that particular form of ‘relational and devotional energy‘ which animates the dialogue between artists distant in time and space. Dialogue which, in turn, is based on the ‘transmission of energy’ proper to works of art, their ‘spirit’, and which is made up of a universal language”; there Special mention to Andrea Botto (age 49) “for being chosen by a large majority of Terna’s peoplewho were able to vote on the forty finalist works on the TernaCult portal”.

The 5 winning works and the other 35 finalists, who win prizes for a total of 26,000 euros, were evaluated by the Curator, Marco Delogu, and by the Jury, with a high technical and artistic profile, made up of Salvatore Settis, art historian and academic , Lorenza Bravetta, curator of the photography, cinema and new media sector at the Milan Triennale, Elisa Medde, editor, curator and writer of photography, Emanuele Trevi, writer and literary critic, Strega Prize 2021, Jasmine Trinca, actress and director, and Massimiliano Paolucci, director of External Relations, Institutional Affairs and Sustainability of Terna. The jurors were also supported by the Presidential Committee of the Prize, composed of Valentina Bosetti and Stefano Donnarumma.

The selected works are also published in the third edition of the photographic volume ‘Driving Energy’, declined as the official catalog of the Award. The Exhibition at Palazzo delle Esposizioni has the patronage of the Ministry of Foreign Affairs and International Cooperation, the Ministry of Culture, the Ministry of the Environment and Energy Security, the Lazio Region and Rome Capital.