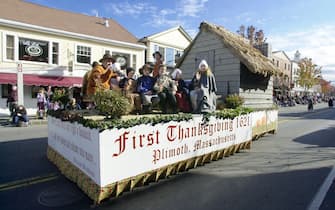 The Thanksgiving Day, according to tradition, it originated in 1621 in the city of Plymouth, in Massachusetts at the behest of the Pilgrim Fathers who arrived in today’s US state with the Mayflower. The first documentation of the recurrence, however, dates back to 1623, when several sources show that the governor of the colony founded in Plymouth, William Bradford, instituted a day in which all members of the community had to give thanks to God for all its blessings

The party stripped of its own Christian origins to assume a civic value in 1863 when, in the midst of the Civil War, Abraham Lincoln proclaimed the celebration of Thanksgiving

Thanksgiving, what it is and why it is celebrated

The definitive consecration of the Thanksgiving dates back to the middle of the last century, when the then president of the United States, Franklin Delano Roosevelt, proposed the official institution, which came approved by Congress in 1941

The anniversary today has become the occasion for US and Canadian families to get together and give thanks for what you have. The party traditionally falls on fourth Thursday of November in the United States and the second Monday of October in Canada

The party is not, however, particularly popular with Native Americans and some minorities who associate it with the memory of the death of their ancestors. For this reason, in some groups, one has been established day of mourning or “no-thanksgiving” to oppose the official party

Tradition has it that Thanksgiving Day comes celebrated in the family and possibly at home, not in the restaurant. Each family, for the occasion, prepares the classic stuffed turkey which is accompanied by sweet potatoes, cranberry sauce, gravy and pumpkin pie

Every year, Thanksgiving is celebrated of course also in the White House. Since the end of the 1980s, the “ceremony of grace”: the president of the United States decides to save two turkeys. The first to pardon birds that otherwise would have ended up on the White House table was Ronald Reagan in 1987, although the first to decide not to cook the traditional turkey donated to the president by the National Turkey Federation was John Fitzgerald Kennedy in 1963

George Bush senior he continued the tradition of his predecessor, as would his son later

Since all presidents they continued the tradition. In the photo the president of the United States from 2008 to 2016 Barack Obama during the turkey grace ceremony at the White House

In fact, since 2003, American citizens they can vote on the name of the turkeys on the White House website: the first were Stars and Stripes (Stars and Stripes, reminiscent of the American flag)