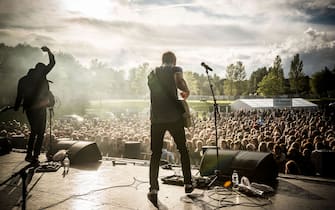 Meanwhile, the first three quarters of 2022 confirm the post-pandemic recovery for live music. From June to September 2022, the total number of shows was 24,119, with over 13 million admissions and a box office expenditure of 450 million and 587 thousand euros

Vasco Rossi in concert, all the dates of the 2023 tour

In the same period of 2019, however, the number of shows had been higher, 29,951, but with 12 million and 200 thousand admissions and a box office expenditure of almost 370 million euros

The Vasco Rossi concert in Turin closed the tour

This means that from 2019 to 2022 shows decreased, but spectators and spending increased (by 22%). Indicator of the desire to return to life after two years of closures. But let’s see the top ten

In tenth position we find Imagine Dragons, who performed on 11 June at the La Maura Hippodrome: 64,124 people for them. Imagine Dragons are also the only foreign name in the top ten

Vasco Rossi at the Circus Maximus, “there is no war where there is music”. PHOTO

Seventh place for the Maneskin, who warmed up the Circus Maximus on 9 July, attracting 70,141 spectators

Maneskin, 70,000 for the show at the Circus Maximus in Rome. THE PHOTOS

The sixth position is all for Ultimo, at the Circus Maximus in Rome on July 17, (70,151 spectators)

Last, 70,000 at the concert in Rome at the Circus Maximus. PHOTO

In fifth position we find a tour date Non stop live by Vasco Rossi: that of 24 May at the La Maura Hippodrome in Milan (81,987 spectators)

Vasco Rossi in concert in Milan at the Hippodrome. PHOTO

Fourth, always Blasco with the date of May 28 at the Imola racetrack (82,297 spectators)

Third position for One none one hundred thousand at Campovolo, the event of 11 June in which Laura Pausini, Elisa, Giorgia, Emma, ​​Alessandra Amoroso, Fiorella Mannoia and Gianna Nannini took part: for them 96,735 spectators

Second place for Ligabue’s live at the Arena Campovolo in Reggio Emilia on 4 June, with 104,328 spectators

The most watched concert (by 111,881 spectators) was that of Vasco Rossi in Trento, at the Trentino Music Arena, on 20 May