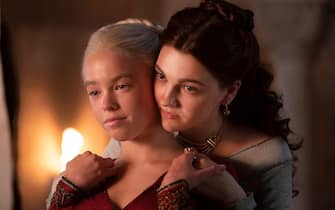 House of the Dragon (Sky Atlantic). The first season of the Game of Thrones spin-off dedicated to the House of Targaryen aired on Sky Atlantic, convincing fans and critics thanks to an excellent writing job, an extraordinary staging and a top-level cast

Golden Globe nominations 2023, the titles to watch on Sky

Christian (Sky Atlantic). A thug who collects credits for a boss in the Roman suburbs suddenly receives the stigmata, and discovers he can perform miracles. But how thin can the line between good and evil be? With a great Edoardo Pesce

Christian, the review of the TV series with Edoardo Pesce

Pachinko – The Korean Wife (Apple TV+). Between South Korea and Japan, in years of imperialism and war, the story of Sunja, a young South Korean who emigrated to Japan, unfolds. Between past and present, a powerful fresco of prejudice and revenge. Also visible on Sky Q and via app on NOW Smart Stick

Andor (Disney+). After a few empty passes (The Book of Bobba Fett and Obi Wan), a great Star Wars series is back. The protagonist is Cassian Andor, a rebel spy played by Diego Luna, already seen in the popular film Rogue One. Also visible on Sky Q and via app on NOW Smart Stick

Andor, the concepts behind the characters’ looks

Wednesday (Netflix). Little Wednesday Addams has grown up and, now a teenager, has to deal with old and new schoolmates and integrate into an academy for outcasts in which she still manages to distinguish herself. At the same time, she is called to solve a series of murders in the town that hosts the school. Tim Burton’s first TV series, who directed the first four episodes. Also visible on Sky Q and via app on NOW Smart Stick

Wednesday, review of the TV series

The Sandman (Netflix). First season of the television adaptation of Neil Gaiman’s comic series of the same name. Sandman is the lord of the Lands of Dreams and after a long imprisonment is called to recover his power and restore order in his kingdom. Also visible on Sky Q and via app on NOW Smart Stick

Netflix renews The Sandman for a second season

The Bear (Disney+). When his brother dies by suicide, chef Carmen Berzatto (Jeremy Allen White) inherits his ramshackle restaurant and is determined to restore its splendour. In the kitchen, however, he will have to deal with family and work tensions, having a hard time imposing his vision and risking a nervous breakdown as he discovers the secrets of his dead brother. Also visible on Sky Q and via app on NOW Smart Stick

The Bear, on Disney + the TV series that tells the story of the sweat of the kitchen

Boris 4 (Disney+). The great return of one of the most popular Italian series of all time has lived up to expectations. From the Network to the Platform, the themes change but the pungent irony that characterized the first three seasons and the film remains. With the memory of Mattia Torre filling every single episode. Also visible on Sky Q and via app on NOW Smart Stick

Boris 4 does not disappoint fans, will there be a fifth season?

Euphoria 2 (Sky Atlantic). Even stronger and more shocking, the second season of Euphoria confirms itself as the ruthless portrait of a generation abandoned to itself and lost

Zendaya is considering directing an episode of Euphoria 3

This is Us, the cast talks about the ending

Stranger Things 4 (Netflix). Penultimate installment of the Duffer brothers’ series. Eleven and his friends find themselves facing a new threat and a powerful new adversary from the Upside Down. To do this, Eleven will have to reconstruct the hidden memories of his past. Also visible on Sky Q and via app on NOW Smart Stick

The Boys 3 (Amazon Prime Video). Even more irreverent, violent and explicit, the series based on Garth Ennis’ comics is confirmed as one of the most interesting products out there, a powerful satire of American society in constant tension. Promoted with flying colors Jensen Ackles, new entry in the cast in the role of Soldier Boy. Also visible on Sky Q and via app on NOW Smart Stick

The Boys, Jensen Ackles would like to return next season

The Crown 5 (Netflix). The series that tells the reign of Elizabeth II does not miss out. The narrative remains tight as you get closer to the most recent events. At the heart of the fifth season, the end of the marriage of Charles and Diana and all the consequences that this event has brought on the Crown. Starring Imelda Staunton as Elizabeth, Jonathan Pryce as Philip, Dominic West as Charles and an impressive Elizabeth Debicki as Diana. Also visible on Sky Q and via app on NOW Smart Stick

The Crown, the cast: characters and actors compared

His Dark Materials 3 (Sky Atlantic). Final chapter of the series that adapts Philip Pullman’s trilogy of novels, the first 4 episodes were released in December 2022. Still to be completed but already among the best serial products of the television season, with great cgi and a top-level cast (James McAvoy, Dafne Keen, Ruth Wilson)

His Dark Materials, the last season on Sky