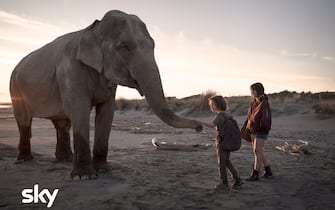 Anna (Sky)
Anna is a Sicilian girl forced to grow up in a world without parents, just like many children like her, living with the awareness that growing up, for her and all the others, means dying from a mysterious disease, the redhead, which she exterminated. the adult population and which is activated upon the arrival of puberty. A dark fairy tale capable of combining a bright and colorful aesthetic with the gloom of a plot that brings out the best and worst of human nature, Niccolò Ammaniti’s series is already an international success

Anna, the trailer of the TV series by Niccolò Ammaniti that has conquered the USA

Gomorrah – Final season (Sky)
The highly anticipated last chapter of Gomorrah – The series has arrived and left its mark with an ending capable of closing the narrative circle in a perfect way. The war between Ciro and Genny fills the 10 episodes, with the return of the Immortal and a series of sensational twists. Between betrayals, deaths, crossed revenge, once again the theme of family and friendship dominate

Gomorrah, the farewell of Marco d’Amore and Salvatore Esposito to their characters

Squid Game (Netflix, also visible on Sky Q and via app on NOW Smart Stick)
The Korean series distributed by Netflix is ​​undoubtedly one of the television events of the year. Capable of capturing the public and convincing critics, Squid Game it is a ferocious satire of Korean capitalist society in which one never laughs and is often horrified. A game that soon turns out to be a war between the poor in which the winner takes everything away and the loser dies

Squid Game, the creator of the series working on a second and third season

Hellbound (Netflix, also visible on Sky Q and via app on NOW Smart Stick)
Building on the success of Squid Game, also on Netflix, has also arrived Hellbound. More classic horror colors than the illustrious colleague, Hellbound tells of mysterious apparitions and condemnations to damnation without explanation, even if the real villain, more than the hypertrophic monsters that drag the unfortunate person to hell, seems to be religious fanaticism

Hellbound, the trailer for the Netflix series

Scenes from a wedding (Sky)
With a formidable cast composed of Oscar Isaac and Jessica Chastain, the remake of the famous 1973 series directed by Ingmar Bergman convinces with its ability to tell a story that is still relevant. Five episodes directed by Hagai Levi that earned Isaac and Chastain two Golden Globes nominations for Best Actor and Best Actress in a Mini-Series.

Scenes from a wedding, an obsession that has lasted for 50 years

Hawkeye (Disney +, also visible on Sky Q and via app on NOW Smart Stick)
The experience with the Avengers ended after the events of Endgame, Clint Barton seems to be enjoying a well-deserved retreat from superhero activity to spend a nice Christmas with the family. But the trip to New York with the children, organized to go to see the musical inspired by the adventures of the Avengers, ends up re-emerging a past that he hoped to have left behind. To help him unravel the situation, a very young aspiring heroine will think about it: Kate Bishop

Hawkeye, the 10 best things from the Marvel TV series

The Undoing (Sky)
Released in Italy in January 2021, The Undoing – The Untold Truths is a surprising and unsettling thriller, played by a couple of stars such as Nicole Kidman and Hugh Grant, protagonists of the disturbing portrait of a family that hides unspeakable secrets behind an apparent and very bourgeois perfection. In the cast also a talented Matilda De Angelis

The Undoing, 8 things you might not know about the TV series

Loki (Disney +, also visible on Sky Q and via app on NOW Smart Stick)
The adventures of Thor’s evil brother across the Multiverse. Struggling with the time-police of the TVA, an organization in charge of supervising the timelines created after the events of Endgame, Loki tries to survive by meeting and allying himself with his variants that he himself should hunt down. Action-packed, with spectacular sets, and the usual great Tom Hiddleston, Loki is one of the best products ever to come out of Marvel Studios

Loki 2, where will the series start from? Speak Tom Hiddleston

Succession 3 (Sky)
The third season of a TV series that is conquering critics and audiences around the world has arrived on Sky just in time for the end of 2021, driven by five nominations for the Golden Globes, the record for a series in this year’s edition. . The saga of the Roy, a family of mass media magnates, continues showing the very unedifying spectacle of a humanity for which power and wealth are worth more than anything else

Tear off along the edges (Netflix, also visible on Sky Q and via app on NOW Smart Stick)
Can the most popular cartoonist in Italy take the leap that takes him to the world of animation? To see the TV series of Zerocalcare, the answer seems to have to be positive. Net of the controversy over the Roman language, Tear off along the edges it was undoubtedly a great success, yet another proof of the talent of an author who, despite being strongly generational, is able to speak to a decidedly vast audience

Tearing along the edges, Zerocalcare also convinces with animation

At home everyone is fine (Sky)
Gabriele Muccino’s first TV series is undoubtedly a successful experiment. Serial transposition of the film of the same name which in 2018 was a great success at the box office, At home everyone succeeds well – The series it is never redundant, never repetitive, expanding the narrative arcs and deepening the characterizations of characters that take on a different three-dimensionality

At home everyone is fine, the difference between the film and the TV series

Maid (Netflix, also visible on Sky Q and via app on NOW Smart Stick)
The story of a common heroine, of a young woman, single mother, who fights every single day to guarantee a future for her daughter. Realistic and moving, based largely on Margaret Qualley’s expressiveness and interpretation (you will probably remember her as the beautiful hippie who approaches Brad Pitt in Once upon a time in… Hollywood), Maid is a series about women conceived by a woman, Molly Smith Metzler. And it shows

Maid, everything you need to know about the Netflix TV series

Arcane (Netflix, also visible on Sky Q and via app on NOW Smart Stick)
One of the revelations of the year. Highly awaited by fans of League of Legends, the videogame whose narrative universe is inspired, a little less by those who have never played it, Arcane amazed by the excellent quality of animations that mix different techniques and styles in an incredibly coherent way. the depth of the characterization of his characters. A great little gem

Murder in Easttown (Sky)
Compelling detective story, Murder in Easttown stars Mare Shehaan, investigator called to investigate the cold case of a girl who disappeared a year earlier, reopened following protests by the girl’s mother. To play the protagonist, torn between her work and a private life that is falling apart, a Kate Winslet in great shape. Two Golden Globes nominations for her and for the series

Murder in Easttown, 10 things to know about the TV series with Kate Winslet

The Witcher 2 (Netflix, also visible on Sky Q and via app on NOW Smart Stick)
Geralt of Rivia returns with new adventures, once again played by a Henry Cavill who appears very at ease in the role of the witcher created by the Polish writer Andrzej Sapkowski and made very popular by a successful series of video games. With good quality of special effects and more accurate writing, the second season is more convincing than the first

Reservation Dogs (Disney +, also visible on Sky Q and via app on NOW Smart Stick)
A series that tells the hardship and abuses experienced by North American indigenous people produced, written, directed and interpreted by North American natives. This would be enough to make it Reservation Dogs by Taika Waititi a white fly, the first of its kind, a series worthy of note and capable of opening an interesting window on a world that is too often forgotten. Then you also have fun looking at it

Midnight Mass (Netflix, also visible on Sky Q and via app on NOW Smart Stick)
Mike Flanagan’s third miniseries is a classic horror that winks at real themes. On an island off the United States inhabited by a small community, the arrival of a new pastor brings with it a series of inexplicable facts such as miraculous healings and rejuvenations. A group of faithful who are ever more fervent and ready to slip into fanaticism develops around the priest. But behind a paradisiacal appearance hides a hellish reality

Ted Lasso 2 (Apple TV +, also visible on Sky Q and via app on NOW Smart Stick)
If the first season had told us the unlikely parable of Ted, an affable American football coach who ends up on the bench of a Premier League team and touches a salvation that would be miraculous, the second shows us the battle of his Richmond to return to the English top league after relegation. Further raising the quality of the series

Sex Education 3 (Netflix, also visible on Sky Q and via app on NOW Smart Stick)
A new principal has arrived at the Mordale high school imposing very strict rules to cancel the “sex school” brand that the institute has earned. Otis has a secret relationship with Ruby but continues to be in love with (and unwittingly reciprocated) with Maeve, Adam explores his recently accepted homosexuality with Eric. In short, sex continues to reign supreme, but also the feelings of a group of teenagers discovering themselves are no less.

Sex Education, the bloopers of the tv series

WandaVision (Disney +, also visible on Sky Q and via app on NOW Smart Stick)
Released in January 2021, WandaVision is a lucky and unusual marriage between the Avengers and 1950s television. This sitcom that slowly turns out to be something different, enjoys the excellent interpretations of Elizabeth Olsen (Wanda Maximoff / Scarlet Witch) and Paul Bettany (Vision). Aesthetically delightful, fun, compelling and full of twists, a great restart point for the Marvel Cinematic Universe

Marvel, at the start of the spin-off of WandaVision dedicated to Agatha Harkness