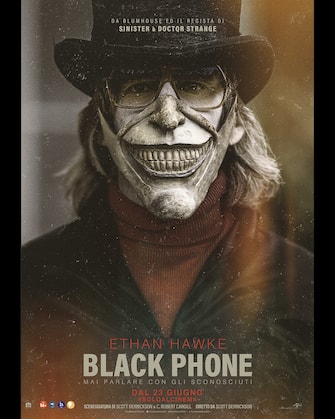 Black Phone with Ethan Hawk. The film will be released in theaters on June 24th. The phone is dead. And it’s ringing. Director Scott Derrickson returns to his roots and collaborates again with the genre’s premier brand, Blumhouse, for a new horror thriller. Finney Shaw, a shy but intelligent 13-year-old boy, is kidnapped by a sadistic killer who locks him in a basement. When a disconnected phone starts ringing on the wall, Finney discovers she can hear the voices of the killer’s previous victims.

Nope, out in theaters this summer. After Run – Get Out (2017) and We (2019), director Jordan Peele signs a new horror. Set in an isolated California town, the film centers on a couple witnessing a mysterious and paranormal event. In the cast Daniel Kaluuya, Keke Palmer and Steven Yeun:

Dario Argento and the television in a surprising book

Halloween ends. Expected to be released on October 20, 2022. Director David Gordon Green concludes his trilogy with what should be the final chapter of the heinous deeds of the serial killer who has been terrorizing the inhabitants of Haddonfield for 40 years

Cold Meat.The first chapter of a horror work, written and directed by Roberto Recchioni on his debut as a film director.The theme is that of wealth and power: who has it and how he uses it, who doesn’t have it and what he is willing to do to have.

Dark Harvest. Director David Slade signs the transposition of Norman Partridg’s horror story Dark, winner of a Stoker Award. Here’s the plot: Halloween, 1963. They call him October Boy or Jack Sawtooth. Whatever the name, everyone in this little Midwestern town knows who it is. When he emerges from the cornfields every Halloween, with a butcher knife in hand, and he heads to town, where gangs of kids eagerly await the chance to face the legendary nightmare.

Don’t Worry Darling, directed by Olivia Wilde, is set in the 1950s and tells the story of Alice (Florence Pugh), a housewife married to Jack (Harry Styles), who lives with her husband in an experimental, isolated and utopian community, leading an idyllic existence. In this idealized community, which gathers happy families, there is the concept of social optimism, typical of that decade, and also carried on by the CEO himself Frank (Chris Pine), who manages every aspect of life in this idyllic place.

Final Destination 6 The script for the sixth film was entrusted to Patrick Melton and Marcus Dunstan, or the pair of Saw, Piranha 3DD and Scary Stories to Tell in the Dark. Their idea is to re-imagine the franchise from head to toe,

Evil Dead Rise, the highly anticipated fourth film in the horror saga “The House.” Here is what Bruce Campbell revealed about the plot: “The protagonist is a single mother who is struggling with the book (the Necronomicon, ed). In recent years the stories are more focused on the book. The book goes around, it’s passed down, people try to get rid of it, then bury it or destroy it but they can’t do it. ”

Mother Nature, Jamie Lee Curtis co-authored an environmental-themed graphic novel called Mother Nature. The horror story itself will be at the center of a film that marks her directorial debut for the actress.

Orphan: First Kill, directed by William Brent Bell, is the prequel to the 2009 horror film about the youth of Leena Klammer (Isabelle Fuhrman), the woman with pituitary dwarfism, which gives her a childlike appearance. Leena spent her youth hospitalized in a psychiatric institution in Estonia, but after killing seven people, she manages to escape the hospital and travel to America. Here she takes the name of Esther and pretends to be a little girl looking for a family.

Eyes of the devil: The Vatican has secretly reopened a school of exorcism after the rise in cases of demonic possession. Exorcism is allowed only to priests and the young Sister Ann can do nothing, convinced that she has a particular vocation to drive out the devil. The only one who recognizes her gift is a professor, who decides to mentor her. Soon, Ann will find herself battling a powerful demonic force tied to her traumatic past. Directed by Daniel Stamm with Jacqueline Byers, Virginia Madsen, …

The Nun 2, directed by Michael Chaves, is the sequel to The Nun – The Vocation of Evil (2018), a spin-off from the horror universe of The Conjuring. It is set in 1956 France, where a priest is found dead. This is a murder. As the evil begins to spread, Sister Irene knows that she will have to face the demonic nun once again. At the moment there are no further details on the plot of the film. In the cast we find Bonnie Aarons, who returns to play the protagonist, the diabolical nun.

The Twin, The film tells the story of Rachel and Anthony (Teresa Palmer and Steven Cree), a couple who lost one of their twin children to a tragic accident. The two decide to move far away, to the other side of the world, and dedicate themselves solely to their surviving son, Elliot (Tristan Ruggeri). In the Scandinavian countryside, where they live now, the days seem to pass quietly. This newfound peace, however, risks being threatened by Elliot himself, who seems to be possessed by an evil entity.

X directed by T West. The protagonists are Mia Goth (Maxine Minx / Pearl). Jenna Ortega (Lorraine). Martin Henderson (Wayne Gilroy). The story is set in 1979: a group of young directors decide to shoot an adult film in rural Texas. When the elderly and lonely residents of the place realize what is happening, the cast must fight for their lives.

Outsiders, a film by Hank Orioon, with Tarik Badwan, Babs Doodkorte. A black high school student finds himself under suspicion after the mysterious disappearance of his classmate.